A lovely 3 days festivities in Berlin for the Berlin Gallery Weekend celebrating the 10 years.

Starting with a reception on Thursday early evening at Palais Festungsgraben and next  days to see as much possible starting at the Potsdamer Strasse strip area.  Friday, I started with the venture down Schöneberger  Ufer towards Esther Schipper‘s “Revenos a nos moutons”, a Liam Gillick exhibition that  plays up an illusionistic space between text and structure.  A mirrored room with a monitor installed at its center projects its content ad infinitum using repetition as a means of reduction. 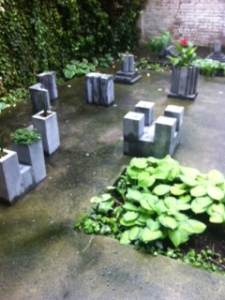 Next door at Galerie Isabella Bortolozzi, Premiered in Berlin is Wu Tsang’s 40-minute, two-channel A Day in the Life of Bliss (2014). This work follows BLIS (played by Boychild), who, according to the press release, “inhabits a ‘near future’ world in which our social media avatars and online personas developed their own hive-minded consciousness called LOOKS.” BLIS is a celebrity-collaborator by day and underground performer by night, who discovers her ability to challenge the Looks. Performance was on Friday evening at 8 pm by Wu Tsang and Boychild but was impossible to get in.

Continued next door, a Phillip Guston exhibition, works  from the late 60s,  at the elegant gallery of Aurel Scheibler. The exhibition comprises of a group of late drawings and works on canvas complemented by two important earlier paintings…the three charcoal drawings in the  show from 1968 and 1969 are important examples of Guston’s new, simplistic language, which he developed since 1966.

Continued at Sassa Trülzch for a wonderful fun exhibition  by Klaus von Bruch , series “In the Future…2008-2014” , Billboards, with a guest in the stair tower:Ingo Günther

…..the artist’s first solo exhibition in Berlin and features sculptures and collage drawings created in 2013 while Bhabha was artist-in-residence at The American Academy in Berlin. The influence of German art on the artist has never been more keenly felt; German Expressionism, the sculptures of Georg Baselitz and the photo drawings of Arnulf Rainer and Anselm Kiefer are among the art historical referents Bhabha explores in this new body of work….(gallery press)

Starting in Charlottenburg,visit Galerie Buchholz at Fasanenstrasse,  exhibition of Lutz Bacher “Homer”. In this exhibition, the artist presents a new suite of 14 photographs entitled “Homer”. This series depicts three off-duty Greek soldiers from the 1970s as they pose in an office, lounge on a couch, and smoke cigarettes on the street of nighttime. Duplications and repetitions of particular photographs upend a narrative progression as the cycle of images seems to stutter, shift, and repeat. …(gallery press release)

Heading to Mitte, a stop at Neugerriemschneider gallery for a Pae White exhibition.

White’s expansive installation in the main room of the gallery is an immersive environment, a highly complex and lyrical composition that consists of twenty-one hovering sculptural models, into which the artist has integrated light sources and various material elements. 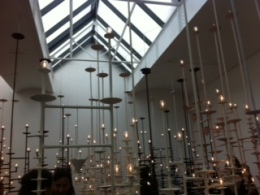 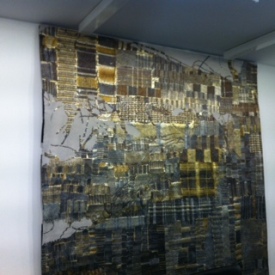 a quick stop to Galerie Eigen +Art  on Augustrasse with Time Eitel and at the Lab with Despina Stokou..   Continued at Michael Fuchs galerie with a first solo exhibition of Marco Brambilla in Germany which features a large -scale 3D video installation from the Megaplex-series and a new body of work