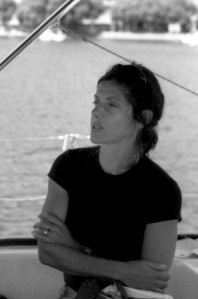 Venetia Kapernekas is an independent art consultant and curator of cultural projects, dedicating herself to the discovery and development of talent in the art world.  She began her career in the arts as an assistant director at the Pascal de Sarthe Gallery in San Francisco in the mid eighties.  In the early 90s, she returned to Europe and established  the “Icebox” a  gallery space in her native city of Athens, which maintained a rigorous programme exhibiting an intense and diverse selection of national and international artists from New York, Berlin, London  and Los Angeles.  She quickly asserted herself as a forerunner of the emerging contemporary art world in Greece and Europe.  In 1998 she returned to New York City, where she established a project space on West 26th street.   In 2005 she entered into a partnership  and collaborated on curating a series of exhibitions (www.venetiakapernekas.com/htdocs/archive.php)

Soon after she realized and pursued her own vision with the Venetia Kapernekas Ltd gallery (www.venetiakapernekas.com) from 2006-2009, introducing a challenging series of projects,  exhibiting innovative young contemporary artists working in a diverse range of media, often pushing the boundaries of traditional modes and concepts of art making.

Since the Spring of 2009 she has redirected her professional efforts towards art consultation, curatorial projects  and education.

In 2011 she moved to Munich , where she was involved in the art community (Kunstverein München e.V.,  Haus der Kunst- Gesellschaft der Freunde, Pinakothek der Moderne) as well as in Berlin (International Council Museum Berggruen; Freunde der  Nationalgalerie) while she travels to numerous museum exhibitions, art fairs,  art galleries, kunstverein, kunsthalle  events.  The latin phrase “placet experiri” (there is pleasure to experiment with something new) as repeated in Der Zauberberg (The Magic Mountain, by Thomas Mann),  could not be more appropriate to encapsulate the contributions of Mrs. Kapernekas as she found  herself in this city, also residence of this beloved writer, creating a certain fluidity in the concrete walls of museums and galleries. Upon her return in New York City, fall 2017, she continues her art curatorial projects and art consultation.

Ms. Kapernekas discovered her love for art while completing her BA in Political Science, with minors in Art History and Social Studies, from UCB, University of California at Berkeley. She then received her MFA (Masters of Fine Arts) in filmmaking and visual studies from San Francisco State University, San Francisco, California.

follow Venetia Kapernekas and her publication on art, design and architecture at www.venetiakapernekasblog.com