A visit last Sunday afternoon at Lenbachhaus Kunstbau -last day the wonderful exhibition of Florine Stettheimer.   I have written in this blog during the opening of the exhibition, on Sept 27th, 2014

Her pictures and poems, her designs for studios and stages constitute a modern synthesis of the arts and a chronicle of urban life. Stettheimer painted beauty contests and the revelries of celebrities, skyscrapers, Wall Street, and consumer culture, anticipating many of the interests that would later animate Pop Art. Her oeuvre is a source of inspiration for some of the most fascinating artists working today.

Achim Hochdoerfer, the new appointed director in 2014 of the Museum has done a wonderful and playful presentation of the collection and the new pieces that have been added. The Mike Kelley rooms are great, the Bruce Nauman in the same room with Polke and the Louise Lawler installation were my highlights.

Pop Art’s seemingly blissful embrace of the consumer world was haunted from the first by a gloomy undertone. Warhol’s images of glamorous celebrities and glittering fetishes of consumption were interspersed with motifs of violence, sensationalism and metaphors of death. As if an icon, the tondo of Marilyn Monroe was created after her suicide. For its counterpart of the smiling Jackie Kennedy, Warhol used photos that were reproduced endlessly after the president’s assassination. These works seem to mirror back to us the cynicism of our supposedly enlightened pragmatism. (museum press release)

and in my favorite rooms, the Cy Twombly sculptures 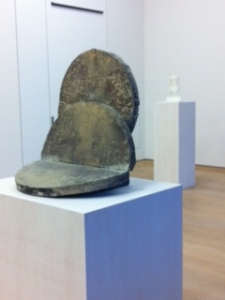