‘Lightscapes ‘: light and delicate as paper, precise as an origami object, and pure  and clean as freshly fallen snow.

When the days are heavy and stormy, as last days in New York, my luxury refuge memories is my passion for porcelain.  About a year ago, a very misty morning, while living in Munich, having an invitation to visit the Porzellan Manufacturer Nymphenburg, I drove to Nymphenburg Palace, where springtime I visited often the gardens, to experience the creations of Ruth Grulich.

Porcelain has been made for 1,000 years, traded for 1,000 years. And it has been in Europe for 800 of these.  You can trace a few shards earlier.  These broken fragments of Chinese for gleam provocatively alongside the heavy earthenware pitchers they were found with an no one can work out how they got to this Kentish cemetery, the Urbino hillside. There are scattering of porcelain across medieval Europe in inventories of Jean, doc de Berry, a couple of popes, the will of Piero de’Medici with his ulna copper di porcellana, a cup of porcelain. (Edmund de Waal, The White Road, a pilgrimage of sorts,)

Here, they make bowls of porcelain, large and small, of incompatible beauty. They are made nowhere else except in this city, and from here they are exported all over the world. In the city itself, they are so plentiful and cheap that for a Venetian groat you might buy their bowls of such beauty that nothing lovelier could be imagined.  These dishes are made of a crumbly earth or clay which is dug as though from a mine and stacked in huge mounds and then left for thirty or forty years exposed to wind, rain, and sun. By this time the earth is so refined that dishes made of it are of an azure tint with a very brilliant scene. You must understand that when a man makes a mound of this earth he does so for his children; the time of maturing is so long that he cannot hope to draw any profit from it himself or to put it to use, but the son who succeeds him will repay the fruit. (Edmund de Waal)

Ruth Gurevich’s models have not created additively; she does a model with paper, she constructs, usually starting with a single sheet of paper.  She cuts, folds, and designs according to a precisely calculated plan.  Like a true architect, Gurvich leaves nothing to chance.  And this is true when it comes to choosing the paper as well; she uses silky soft, absorbent paper made from cotton fibers, like the packing paper used for rolls of film. To fix the models in place, she uses off-the-shelf paper glue.  This creates tensions, kinks, and seams that give the vessel support and structure. (Nymphenburg Manu Factum) 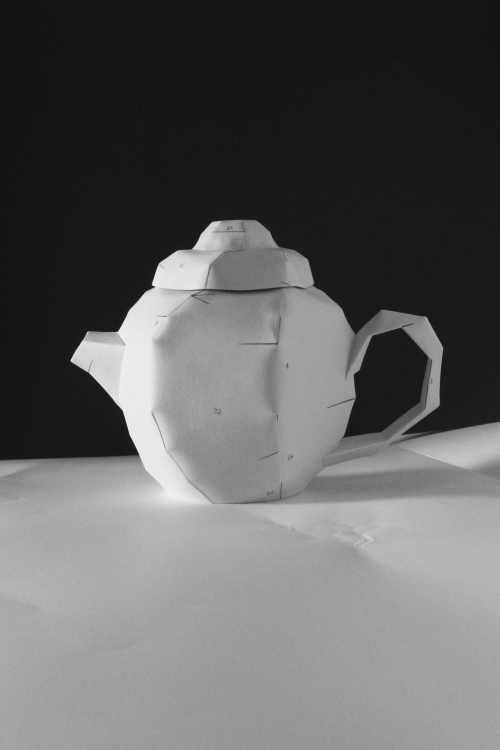 Ruth Gurvich to the question ‘how do you transform paper into porcelain’,  She says: …‘for the production, we had to take a completely fresh approach.  The idea was always to translate the paper character of the models as accurately as possible, even including to the feels of it, but I also wanted to expose the construction process and structure. The cuts and splices, the kinks and curves, even the measurements I had written in pencil on the model, which provides the idea for the decorative painting.’

Ruth Gurvich originally studied architecture before she turned to painting, and this is reflected in her creations. The major theme of her life’s work is the examination of spatiality and dimension, and the passion to captivate space in delicate porcelain vases.

‘Porcelain had interested me for a long time, so the idea was to translate the feel and character of the paper models, as accurately as possible, to porcelain,’ the Paris-based Argentine, who is known for her three-dimensional work with paper. A beautiful video, (Ruth Gurvich: An artist with scissors and paper): camera by Frank Becker.

Ruth Gurvich was born in Cordoba, Argentina in 1961. Initially, she studied architecture in her homeland, but in 1979 she switched to art, continuing her studies at the École Nationale Supérieure des Beaux-Arts in Paris from 1987 to 1991. In her designs, Ruth Gurvich aims to show the shapes and structures of everyday things the way they are. Her ‘lightscape teapot 2011’, manufactured by Nymphenburg Porzellan, is part of the Product and Decorative Arts department at Cooper Hewitt, New York.  Ruth Gurvich lives and works in Paris.