My last day in Venezia Biennale, May 10th,(2015) was a beautiful Sunday morning visiting the island of San Giorgio Maggiore.   Hiroshi Sugimoto’ exquisite glass tea house ‘Mondrian’ was a pure delight.  The project seems complex but the purity and simplicity of the form kept me silent and was enjoying the serenity of the space during that very warm morning.

Glass Tea House Mondrian is Sugimoto’s first architectural work in Europe. He has built a pavilion of extraordinary beauty in a formerly unused space on San Giorgio, located between Andrea Palladio’s famous 16th-century church and monastery and Le Stanze del Vetro museum, and adjacent to the Borges Labyrinth, which architect Randoll Coate designed as a tribute to the Argentine writer.

Visitors approach the pavilion by a way of a small Japanese garden leading to a bamboo gate that sets the atmosphere for the main pavilion. The pavilion itself consists of two main elements: an open-air landscaped courtyard with a reflecting water pool and a glass structure. The courtyard is surrounded by an exterior fence made entirely of Japanese cedar and inspired by the Ise Grand Shrine in Ise, Japan.  Along one side of the reflecting pool of deep blue glass mosaic, a black tiled path guides visitors to concrete benches from which the tea ceremony can be observed.

Like Sugimoto’s photographs, this work conveys a meditative, almost religious atmosphere: it is an oasis of calmness that invokes time, memory, and a heightened sense of self-awareness.

‘In the sixteenth century, it became the custom for cultivated Japanese people of a certain social status to enjoy the rituals of the tea ceremony. The quotidian act of preparing a cup of tea for a visitor was raised to the level of art, with meticulous care of lavished upon the unique goal of entertaining one’s guests. ‘ ……

‘Traditionally, the name of a tea house has to be a poetic evocation of space. I was startled to discover something redolent of Mondrian in the Glass Tea House when it was completed. The quest for abstraction, I realized, had been underway in the context of the tea ceremony for three hundred years before Mondrian was born. Sen no Rikyu, the man credited with perfecting the tea ceremony esthetic, essayed Mondrianesque abstraction in the way he placed stones in the garden or composed flat wall surface at Taian, a sixteenth-century tea room which still stands near Kyoto. Inevitably, Sen no Rikyu had a powerful influence on my design for the Glass Tea House.’  (Sugimoto, on the preface of his book Glass Tea House Mondrian, Le Stanze del Vetro)

‘An intrinsic property of glass is its transparency. I owe my career as an artist to transparent glass lenses. Making a space from the glass was more about indicating a space than actually creating one. Glass Tea House Mondrian measures just 2.5 x 2.5 meters. As a living space, it is only about as big as a jail cell. However, because of its transparency, this cell-like space enjoys an infinite connection to the world outside. ‘ ( “Glass Tea Bowls by Hiroshi Sugimoto)

“While the tea house was being built, I visited the site every afternoon, but in the mornings I went to a glass factory in Murano, where a master glassblower made the tea bowls after my own designs.  Rather like Le Corbusier, who painted pictures in the morning and designed buildings in the afternoon, I was a glassmaker in the morning, a site foreman in the afternoon, and a roaming photographer capturing the deserted streets of Venice in the evening.” (Sugimoto, Glass Tea Bowls)

a beautiful blue linen book accompanies the Tea House Mondrian with detailed photos of the construction site and architectural drawings.

“Sugimoto’s pavilion is effectively a space for performance. He has provided delineated space for the audience to observe the theater with the tea house situated in a pool within a larger landscape…….. No single element can be altered without irrevocably damaging the whole. The linear and focused arrival sequence prepares the visitor for the perspective views, as one contemplates the contemporary glass tiles and old, authentic stepping-stones. It is carefully wrought balance of new and old materials and forms, a dance where each element corresponds to a specific movement in the sequence.” (Annabelle Selldorf, architect, Glass Tea House Mondrian) 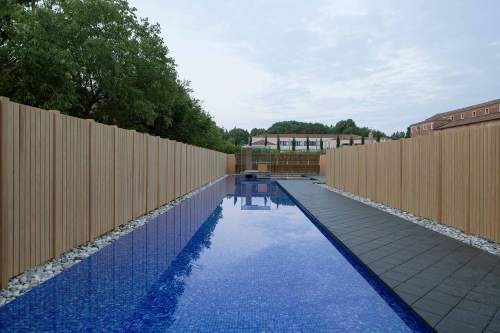 Also at Le Stanze del Vetro, there is an amazing exhibition “Glass from Finland”. Over 300 works from the Bischofberger Collection celebrate the beauty of art glass in an exhibition featuring masterpieces by the most important Finnish designers of the 20th century.

The exhibition “Glass from Finland in the Bischofberger Collection”, curated by Kaisa Koivisto, curator at The Finnish Glass Museum, Riihimäki, and Pekka Korvenmaa, a professor at Aalto University School of Arts, Design and Architecture (Finland) 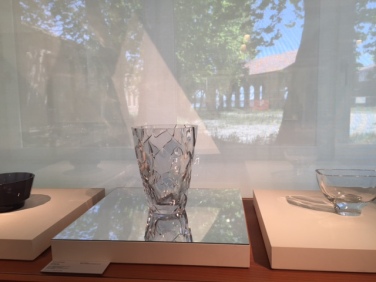 In the early Twenties, Finland used design as its manifesto, in an attempt to establish its autonomy and its cultural sovereignty. Some of the country’s greatest designers began to use glass to create works of art that blended tradition and experimentation.

After 1932 Finnish glass became known worldwide and served to reveal the skills and creative talent of those who would soon be regarded as the visionary geniuses of Scandinavian design – i.e. Arttu Brummer, Gunnel Nyman, Göran Hongell and  Alvar Aalto. Numerous women have been active as artists and designers throughout the history of glass design in Finland. The collection covers the oeuvre of Gunnel Nyman and Aino Marsio Aalto. 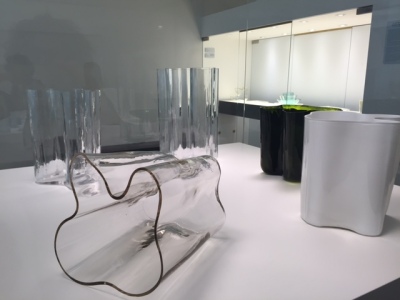 In the early Fifties, through the new spirit of optimism and the international influence, designers and artists built up the foundations of what will become known as “the golden age” of Finnish glass.
In order to meet the functional and psychological demands of its users, designers started producing objects and works of art that were both aesthetically sophisticated and mainly referred to nature by the free use of organic shapes and curves.
Along with internationally acclaimed designers such as Alvar Aalto, other artists became the new stars of Scandinavian design, such as Kaj Franck, Timo Sarpaneva, and Tapio Wirkkala, who is considered to be the symbol of the international success of post-war Finnish design. 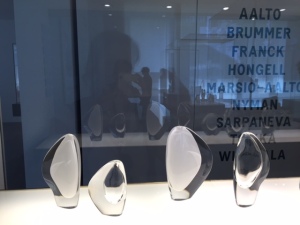 During the Sixties and Seventies, color and energy became the main focus of Finnish design; the glassworks became colorful and were given elaborate shapes. Oiva Toikka designed glass birds, which became Iittala’s iconic brand. Through his irreverent approach to the glass medium and tradition, Toikka represents the connection between “the golden era” of the fabulous Fifties and a more contemporary design. 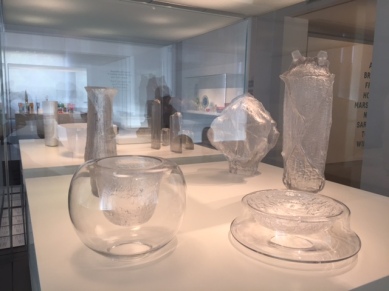 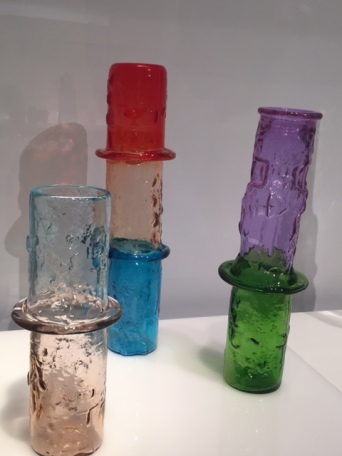 Haus der kunst organized on Thursday night, Feb 13th an evening panel with three leading thinkers to engage in a discussion that tried to  illuminate  critical questions.  Panelists were  Matthias Lilienthal (director of the Munich Kammerspiele from September 2015), Hito Steyerl  (filmmaker and author (born in 1966 in Munich) lives and works in Berlin) and Joachim Bernauer  (director of the Goethe-Institut’s department of culture); the moderator is Okwui Enwezor, director Haus der Kunst.

“The recent killings of journalists and police guards in the Paris offices of the satirical French magazine “Charlie Hebdo” have brought to public debate fresh appraisals of the relationship between intolerance, free expression, censorship, and the right to offend sensibilities, be they cultural or religious, political, or ideological. But there is not always an easy distinction of where to draw the limit of free speech and who has the right to impose a limit on expression, regardless of how offensive such expression may be deemed.

At the same time, questions posed by the killings in Paris can be analyzed from the view of the current conflicted state of global, multicultural societies. This issue becomes urgent, particularly when giving offence converges with intolerance under the guise of free expression. But is there a point when offensive images, expressions, and representations become intolerable? Is intolerance of certain types of expression the same as censorship of thought? Can there ever be a limitless sphere of free expression in today’s increasingly plural, multicultural, transnational, and global societies? These questions are all the more pertinent within the realm of artistic and cultural practice, particularly as they meet at the point where institutions must provide an open and unrestricted space for challenging ideas and concepts.” (haus der kunst, press release)

“The rising cities of the Gulf region and arenas of conflict in the Middle East are captivating subjects of media coverage. Both in terms of their content and through their manipulative aesthetic, the often extreme images from these areas shape our western view of the region. Twelve artists counter this flood of images with more diverse artistic practices that reflect on social conditions. Some of these artists ‒ Ahmed Mater, Hazem Harb, and Nasser Al Salem ‒ are for the first time introduced to the German and Munich public…..   The exhibition title refers to the concept of “grounding” in communication theory, which posits that communication partners share common knowledge, which allows for dialog to be successful.” (Villa Stuck Press release)

“….The exhibition’s layout at Haus der Kunst is structured according to four chapters: The show opens with autobiographical works – from “Are You Waiting” (1996), a precursor to “Fiorucci Made Me Hardcore”, to “MyAlbum: A Rough-Demo Video,” (2014-15) a filmed autobiography, which is premiered as a demo version. Mark Says Leckey: “‘MyAlbum’ is a record of all the events in my life during the twentieth century that I feel were significant. It is a memoir from 1954 until 1999.” In the central space, all five of the artist’s “Sound Systems” (2001–12) are presented for the first time as an ensemble…” (HdK exhibition release) 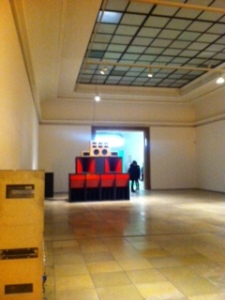 more events for the exhibition here

“The heterogeneous work of architect David Adjaye (b. 1966) comprises approximately 50 built projects – from luxury shops and museums to libraries and social housing. His most recent commissions include the design of the National Museum of African American History and Culture in Washington, D.C., as well as the National Museum of Slavery and Freedom in Cape Coast, Ghana. The buildings of the Ghanaian-British architect are often developed in collaboration with artist friends, including the homes he designed for Chris Ofili, Sue Webster and Tim Noble, and Lorna Simpson and James Casebere…” (HdK release)

more on lectures and seminars on the exhibition