Few days in my beloved New York City,  and a  long time admirer of Catherine Opie ‘s  work since the beginning of her career, early 90s, I enjoyed her double -venue exhibition, on view  at Lehman Maupin galleries which encompasses abstract landscapes, formal portraits, and the “700 Nimes Road” featuring  the artist’s portfolio of 50 photographs documenting the interiors and belongings of the late Elizabeth Taylor.

The artist Catherine Opie on conversation with  Juliet Helmke how she relates the  two different ‘bodies of work’ in the galleries, she says,
“I think of them as two different ways of looking at portraiture. The Chrystie Street space is showing the Elizabeth Taylor portfolio, “700 Nimes Road,” the address of Taylor’s home, in which the series was shot. The Chelsea location has the abstract landscapes taken in national parks, along with new portraits of my friends emerging from this very black background. They have a very strong compositional relationship to history painting, such as Da Vinci’s, shown with the abstract landscapes that act as moments of memory. I feel like this is a body of work where I’m departing from my history of documentary photography, because the portraits in particular are about a very internal space, even though they’re images of real people. They have more to do with the subconscious, and desire, and the question of what a portrait does for us in the age of social media. Can we be held? I’m interested in this question of being held by an image now, in a society in which they are constantly passing in front of us. We flip through our screens. Making these portraits, I was using an idea of history painting, so to speak, to remind people about desire, and to will them to look longer.” (Blouin Artinfo, Modern Painters, “Catherine Opie on her Diverse Body of work, jan 10, 2016) 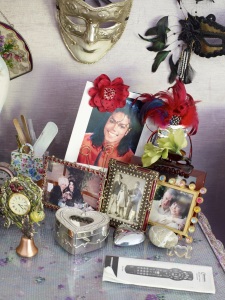 Juliet Helmke: How did the “700 Nimes Road” series come about?Catherine Opie: It happened that Elizabeth Taylor and I shared the same business manager. I had just finished the inauguration portfolio of the 2008 election of Obama. After that, I wanted to work with a subject as iconic as Elizabeth Taylor, but to make a quieter, humbler, more humanistic portrait of her by looking at her through her home and her belongings. It was six months of very carefully figuring out how to do it, and in the middle of it, in March of 2011, sadly, she passed away. It changed the meaning. All of a sudden I became the last person there, the person bearing witness to her home. I tried not to let that dictate it entirely, but it certainly was present in finishing the body of work. (published at Modern Painters, January 10, 2016)

…Opie’s photographs present Taylor’s domestic sphere as a minutely observed landscape of  fragments, surfaces and textures. The photogra­pher spent six months  in the house, including entire days spent srudying how the  light moved through particular rooms. Again and again, Opie would zoom in rightly on an object  or group of objects (pantsuits hanging in a closer, knickknacks gathered on a tabletop, a diamond tiara on a furniture cushion) as though to isolate particular things without intrusion from the many other things just beyond the frame. Because the images remain so resolutely focused, they rarely offer a sense of the overall logic of a room, much less the layout of the house. (Star Turn, Richard Meyer, Artforum, January 2014)

about her “Portraits and Landscapes”,  Catherine Opie says to Juliet Helmke,

…..I worry about losing how our imagination can lead us to other ways of answering questions in life, because in terms of fulling curiosity, everything is answered by the click of anger. The works at Lehmann Maupin’s Chelsea space are so much about this, especially the abstract landscapes. They’re saying, imagine the place you might be. I’m putting you somewhere literal, in an actual national park, but that you can’t recognize and so you’re slightly displaced—in a way that a portrait won’t displace you.  The portraits just ask you to keep staring. But then the landscapes ask you to keep staring as well, because they harken back to the idea of American genre painting, without the clarity of American genre painting. You imagine a moment of Bierstadt, but at the same time, you’re not looking at Bierstadt because the detail’s not there. You’re left only with the atmosphere.”   (Blouin Modern Painters, Q&A with Juliet Helmke, January 2016) 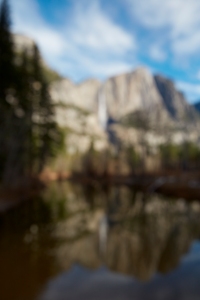 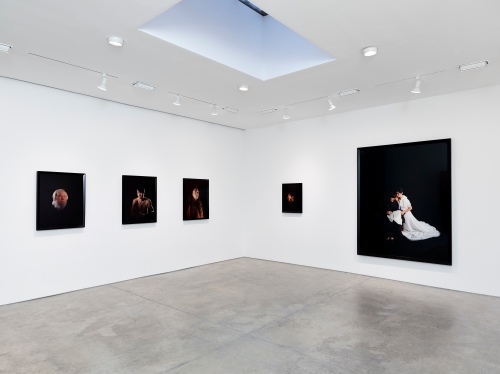 “….I love editorial photography. I like thinking about the platform and how images are put out in the world. I don’t talk a lot when I’m photographing, even in making portraits. I’m posing people and really watching them; looking for more of an internal space that probably mirrors my internal space too. It’s de nitely a portrait of the person, but I think, as with every portrait, there’s an element of self-portrait to it. I don’t want that to be confused, for example, in the football players series, with wanting to be a high school football player; I don’t. It’s more about bearing witness to each other. There’s a moment: I’m looking at you, you’re looking at me. We’re here for this one little, teeny moment together. It’s just such a wonderful short dance. You’ll never see them again, yet you carry them with you your entire life because you’ve had this exchange. I really love that. That goes back to humanism. We’re all in this together. Let’s all be human together, whether our political views or aspirations in life are different. We get to have this shared moment.” (Catherine Opie in conversation with Juliet Helmke of Modern Painters, January 2016)

Opie would take about three thousand pictures of the house and grounds, from which she would ultimately select the sequence a group of fifty for a limited-edition portfolio. (In additions a selection of 129 pictures, including all fifty  from the portfolio, appears in the  book “”700 Nimes Road” Published by Prestel Verlag (2015) with contributions by Hilton Als,Ingrid Sischy, Tim Mendelson.

Thank you Lehman Maupin gallery for gifting me a copy of  this fabulous publication.

“Inside the World of Elizabeth Taylor”; Artist Catherine Opie on photographing the late actress and activist’s home for a new book, ‘700 Nimes Road’ at Harper’s Bazaar (sept 2015)

In 2016,  the Hammer Museum in Los Angeles is showing work from Opie’s new portrait series inspired by Old Masters paintings (Portraits, 30 January-22 May 2016)  and the Museum of Contemporary Art’s branch at the Pacific Design Center is showing the “700 Nimes Road” 23 January-8 May 2016).