Nikos Karaflos, the visionary entrepreneur-turned-hotelier, originally contacted k-studio www.k-studio.gr  several years ago with an idea to transform an abandoned wine factory on the west coast of mainland Greece, into a hotel.  Nikos ‘s family is from that part of Peloponese (municipality of Helias )  and his  memories as a child were around that area of ‘kourouta’ and love for his childhood family summers filtered his long dream to create/revive something special.

“Trying to raise awareness to save an old factory of currants from demolishing can be a horribly disheartening process” Nikos told me; with family help the  purchase through an auction to save that old factory and its history became a reality.

The history of Dexamenes°° dates back to the ‘Era of Currants‘.  Since the liberation of Greece in 1830, the cultivation of currants took on impressive dimensions and currants were the main export product of the Greek Kingdom. But when the ‘Currants’ Crisis broke out in 1910 in Greece, the trade of currants collapsed and there was a need to convert the unsold stock of currants into alternative products, such as wine. This was when the first wineries and distilleries were created. Dexamenes°° was built on the sea so that ships could be loaded with wine directly from the tanks, before setting sail for the major overseas markets. The derelict, industrial structures that characterize the site were left relatively untouched since the 1920’s, sitting quietly on one of the most unspoiled and beautiful stretches of coastline in the western Peloponnese.

After a long process of design, development and incredible bureaucracy,  Nikos ‘s  dedication to the management of the project had been completed and the Dexamenes°° Seaside Hotel www.dexamenes.com opened June 2019. Those  difficult last months for the whole planet as of Covid19, the  decisions and planning have become the most difficult task.  I was informed about the Dexamenes°° while in New York last fall, after a direct phone call  I made the  decision  to visit the spring 2020 with my daughter. The lockdown permitted us to visit end of June. My early childhood memories (my mother comes from that region) and the summers in that nearby seaside,  connected me  to a short pilgrimage trip and indeed became our destination travel.  We both immersed ourselves in this fabulous natural landscape of the Dexamenes°° for 12 unforgettable days. While I am editing and writing on my desk today, a very unusual hot afternoon  in Munich, I recollect my memories of our arrival the  hot afternoon June 20th, arriving after a 3 hour drive from Athens, indeed the feeling was similar maybe going to an Arizona dessert.  Nikos Karaflos was waiting for us with the lovely consierge Georgia Koutsioubi behind their protective covid-19  masks with refreshing glasses of fresh lime & cucumber juice; walking thru the old factory Nikos shares with us the inside story of his dedication and dream. The landscape was welcoming us with a splendid embrace heat while walking around the factory and the breeze was traversing  through.

Constantly one is drawn to the abundant growths of the regional plants, where very carefully have been selected by the architects and Nikos Karaflos, from the yellow mexican feather grass  (nasella tenuissima ) and along the border fence by the sea the leymus arenarius. Recollections of my last spring trip in Tulum in Yacatan, feeling of disorientation being  in this magical place in the western Peloponese, just across from the Ionian islands.

I was  drawn to the details within this stark landscape. What a  natural splendour. (midday photos @venetiakapernekas) 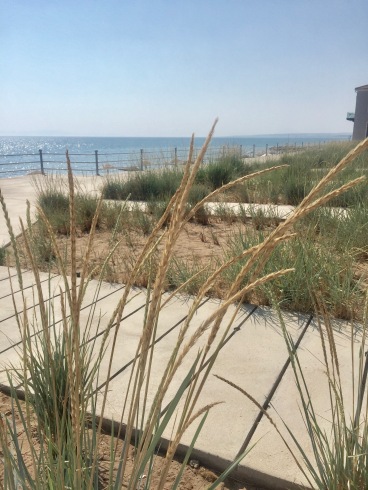 From the outset it was clear that the strong history and raw beauty of the existing buildings should not only be preserved, but be showcased in a design that would breathe new life into their walls. Here the architects plans compliment their brutality with elegant interventions and transform their austere functionality into a place of calm, comfort and relaxation. This last february, Dexamenes was one of the 3 projects by the K-Studio included in the beautiful edition, New Perspectives, The Design Hotel Book, Edition 2020

I recollected memories while a Berkeley  University student in the mid 80s, an invitation brought me south to Palm Springs. Palm Springs made Desert Modernism, not the other way around.  The house of Frank Sinatra completed in 1948, architected by Stewart Williams, unleashed a new architectural frontier, Desert Modernism – a regional take on Midcentury Modernism – which has been bubbling away in Palm Springs for around two decades already, led by visionary architects like Richard Neutra, Albert Frey, and William F Cody. (Lucy Brook, on her article ‘Desert Modernism’ at Cereal, 2016)

Inside, a narrow black steel framework collects together the various beautifully detailed elements within the 30sqm space, organizing them with Zen-like precision. Textured glass brings light through from the bedroom and dressing areas into the bathroom. Generous proportions in the shower and WC bring a sense of luxury to the warmly toned and textured surfaces and polished terrazzo is a visual link to the colourful texture of beach-pebble aggregates revealed wherever the old walls have been sliced through to create new openings…The courtyard tank rooms are identical in their ergonomic layout. Original features such as the manholes and pipes in the façade of each tank and the patina of the internal wall surfaces have been preserved.

The factory as was made with hard concrete  walls to house the currants in old days, had a very simple philosophical eco statement; at that time no air-condition or any technology would ‘save ‘ from the heat so the wise old greeks at the time to create a ‘shelter for their crop, their currants, they had to create the coolest rooms ever..  Nature, ‘preserving the currants’ will be the mode to create a small oasis for our visitors to ‘rest’ and cool down where the team of K-Studio architects and Nikos were based.  Indeed, they succeed on that ! and ‘Dexamenes’ won the best New Architecture in an Existing Bldg Awards at the Domes 10yr awards, 2019 and Winner of Best Suite in the Ahead Europe Awards, 2019.

Local grape and currant varieties are becoming well established along the edges of the garden and will gradually make their contribution to the microclimate and productivity of the hotel. 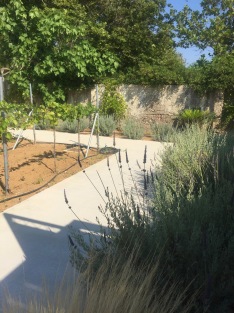 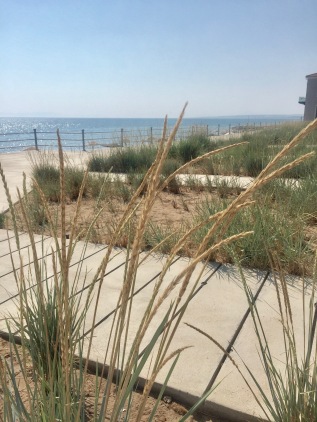 In addition to the tank rooms, their pavilions and the courtyard garden, the 2 original stone out-buildings have been carefully converted to provide the hotel with in-house dining and event facilities with a focus on communicating the culture of the area and the history of the building through art and cuisine. Reclaimed bricks found inside the original structures line the floors and terrace, and the pitched roofs have been restructured with bespoke ceramic tiles made locally and crafted to blend with the originals.

The old factory’s engineer room features an open kitchen with a communal dining table for wine tastings and cooking workshops, and an external dining terrace. Precautions had to be taken this year as the C19 so quite the arrangements had to be changed. 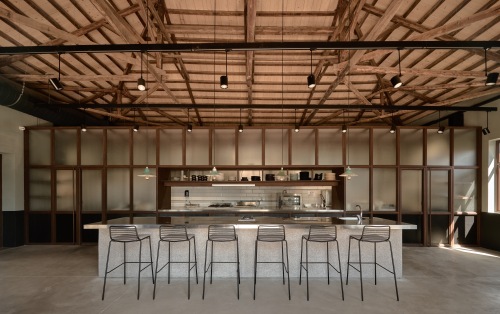 For Chef Spyros Drakoulis modern cooking has become a serious art, but for him also is something instinctive. His search for fresh produce starts very early in the morning in the local market in Amaliada  and early visits to see the fishermen or to contact the best regional honey producers or the best extra virgin oil of the area. Chef Drakoulis ‘ cooking mirrors his love for his region, his family secret receipts, honest , fresh food.  Some afternoons I would come from the sea and say hello and he would be working  his mask, making new fresh bread, ‘zea’  for next morning. The ‘glue’  that cements the team of his kitchen together is his command in the most amazing way as he educates, explains to his staff every little detail of his cooking, all behind the ‘difficult mask’. One afternoon I met the beautiful Chryssa Giatra Batzi , consultant and aenologist who visits Dexamenes to train the  team for the best greek wines to accompany the delicacies of this magical kitchen. 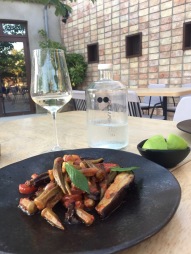 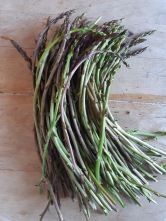 Ancient Olympia, (the eternal flame of the Olympic sprit ) is 25 km away. The Olympic Games—the most famous and important sporting event in the ancient world—paid homage to the finest athletes. That tradition continues to this day, nearly 3,000 years later.  It was a place where remarkable works of art and culture were created and shared to worship the Greek god Zeus. 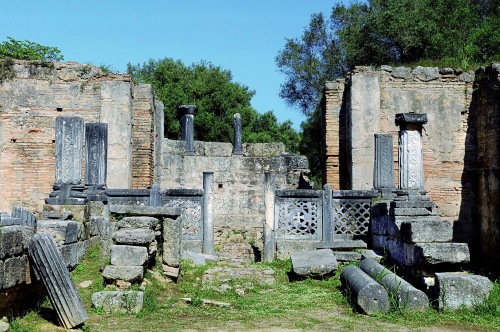 The interior of the workshop of Pheidias, where the great sculptor crafted the gigantic chryselephantine statue of Zeus. In the early Byzantine era, it was converted to a Christian basilica.

Nikos Karaflos  is managing his  small paradise with an extraordinary  team; as the C19 did not allow the ‘Dexamenes ‘ to open as scheduled in April, the hard working team meeting  all the needs for their  guests_ opened first week of June, with all precautions and masks always in place, (quite miraculous with the heat). Our stay was the most beautiful and memorable and we will come back soon. Thank you Dexamenes

Nikos Karaflos, is the imagineer and CEO of Dexamenes Seaside Hotel, a place of meaningful luxury that changes the way we experience hospitality. With a strong background in Electrical Engineering and Computer Science, as well in Lighting and Multimedia, he believes in devising powerful ideas with cultural and social impact.

K-STUDIO is a design practice rooted in Architecture.n”Our home is Greece, a country of incredible natural beauty and resources, where the cultural identity is founded upon being outside and making good, economic use of local skills, materials and agriculture to provide nourishing hospitality to visitors from near or far.”

Clara Porset,(1985-1981)  (whose headnotes marks the beginning of the article), a political exile from Cuba who became one of Mexico’s most prominent modern furniture designers. Influenced by Bauhaus ideas, she believed that design could reshape cities, elevate the quality of life, and solve large-scale social problems. (exhibition at the Art Institute of Chicago, Sept 6, 2019-Jan 12,2020)

Foloi Oak Forest (photo of mushroom by Chef Spyros Drakoulis): According to mythology, the forest was named after the Centaur Pholus, who gave roof to his friend, Hercules, on his way to locate the Erymanthian Boar. Pholus offered Hercules a divine wine which excited the rest of the Centaurs who attacked the two friends. During the battle, Pholus was injured by mistake from one of Hercules’ arrows. The hero decided then to name the forest Foloi after his friend.