……extraordinary performances we have come to expect from Cate Blanchett, who is paired with the no less impressive Rooney Mara as Therese in the director Todd Haynes and the writer ­Phyllis Nagy’s mesmerizing and moving film adaptation of  Patricia Highsmith’s anxiety-laced romance “Carol“. (Frank Rich,’Loving Carol‘) at  New York Magazine,  November 15, 2015) producer; Dorothy Berwin.

In early December 1948, Patricia Highsmith took a Christmas-season temp job as a shopgirl in the children’s toy department at Bloomingdale’s. Highsmith, a 27-year-old native of Fort Worth, Texas, and a 1942 Barnard graduate, was a budding novelist who had been supporting herself for five years as a freelance action-comic-book writer, concocting stories for lesser superheroes like Spy Smasher and Black Terror — a rare gig for a woman in the golden age of comics.

Patricia Highsmith (19 January 1921 – 4 February 1995) was an American novelist and short story writer, known for her psychological thrillers, which led to more than two dozen film adaptations. Her first novel, Strangers on a Train, has been adapted for stage and screen numerous times, notably by Alfred Hitchcock in 1951. In addition to her series with Tom Ripley as protagonist, she wrote many short stories. Michael Dirda observed, “Europeans honored her as a psychological novelist, part of an existentialist tradition represented by her own favorite writers, in particular Dostoyevsky, Conrad, Kafka, Gide, and Camus.”[2]

“Carol’  is certain to bring new readers to Highsmith, and once they dig in, they will be ravenous for more.

Highsmith was a lifelong diarist. She left behind eight thousand pages of handwritten notebooks and diaries.[6] After graduating from college, she started applying for work in various magazines, such as Harper’s Bazaar, Vogue, The New Yorker, Mademoiselle, Good Housekeeping and others, carrying “impressive” recommendations from “highly placed” professionals, and was getting rejected.[4] Her short stories started appearing eventually in Ellery Queen’s Mystery Magazine, in the early 1950s. 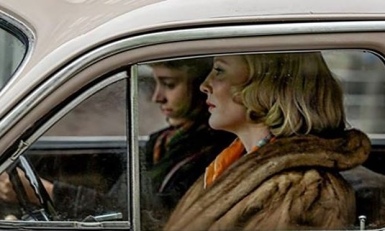 The simple use of color for Blanchett and Mara’s clothing says plenty about the characters, especially in the silences the movie wanders into for extended periods. If there’s one complaint, and it’s just a personal preference, it’s the use of filters. (Lesley Coffin, movie Review, ‘Carol’ is a Beautiful, Composed Slow-Burn)

….But then you look at a film like Carol, and peer through the windows it opens onto both cultural history and actual history, and you realize how much we don’t know about a past that unfolded in the shadows until not very long ago. You also start to wonder how many cultural treasures and figures are buried in that antiquity, invisible to most of heterosexual America and perhaps to much of younger gay America, too. Highsmith’s “lesbian book,” its million paperback copies of six decades ago notwithstanding, is just such a case.(Frank Rich, ‘Loving Carol’at New York Magazine,  nov 15, 2015) 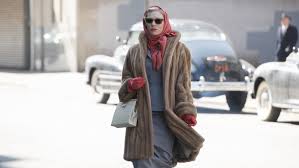 Anatomy of a scene “Carol” at New York Times/Culture

What Haynes gets so perfectly right with this film really is the very specific sense of time and place, the urban life of those torn between domestic life and beat culture, before public and vocal feminist and LGBT activism. (Lesley Coffin, movie Review)

The greatest credit needs to be addressed to the producer of ‘Carol’, Dorothy Berwin, a dynamic London-born, New York based producer who as the Hollywood Reporter says, ‘has never been one to chase trends. She began developing the Cate Blanchett-Rooney Mara love story Carol, another TWC title, nearly two decades ago — long before there was a box-office appetite for such fare…

On the Q of Hollywood Reporter to Dorothy Berwin, “You spend 19 years developing the Patricia Highsmith novel ‘Carol’. Why did it take so long? Dorothy Berwick answers; ” I was working on it with (playwright) Phyllis Nagy, who wrote the script and kept refining it. And Todd Haynes worked to make it his own, though it was very much Phyllis ‘ script. I used to love pitching it as;  “It’s 1950s New York. Grace Kelly walks into department store and falls in love with Audrey Hepburn.” 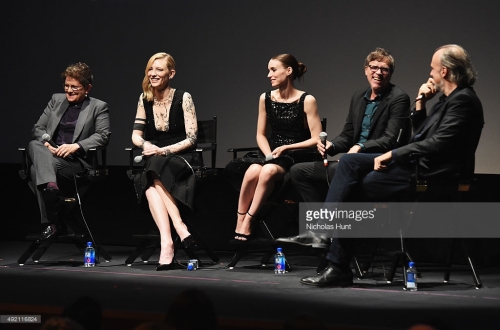