During my short visit in Athens 2 weeks ago,  I had the pleasure and honour to see a beautiful, vibrant and poetic exhibition at the Museum of Cycladic Art, “Always starts as an encounter; Wols /Eileen Quinlan”curated by Helena Papadopoulos &  produced by radio athènes.  (March 17-May 8, 2016) . Walking thru the exhibition with my long time friend lovely Helena whom I fully admired for her curatorial practice for years. Helena so accurately  had been preparing  this exhibition from the last 2 years.  An artist talk and lecture with Quinlan and art historian Olivier Berggruen took place on March 18, 7PM 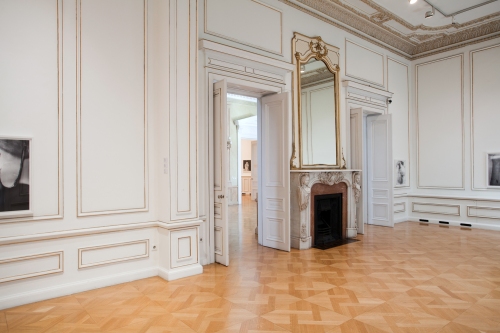 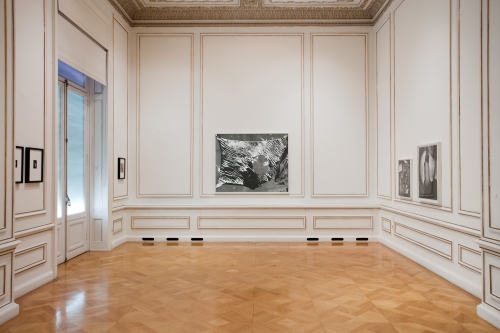 The Stathatos mansion : A marble staircase leads up to the elevated ground floor of the mansion, to the dining room and the main drawing room, as well as a cast-iron rotunda axial to the entrance. No alterations have been made to these rooms, which have retained their original gilded stucco mural decorations, chandeliers, and fireplaces (during exhibitions parts of these are covered by wooden revetments). 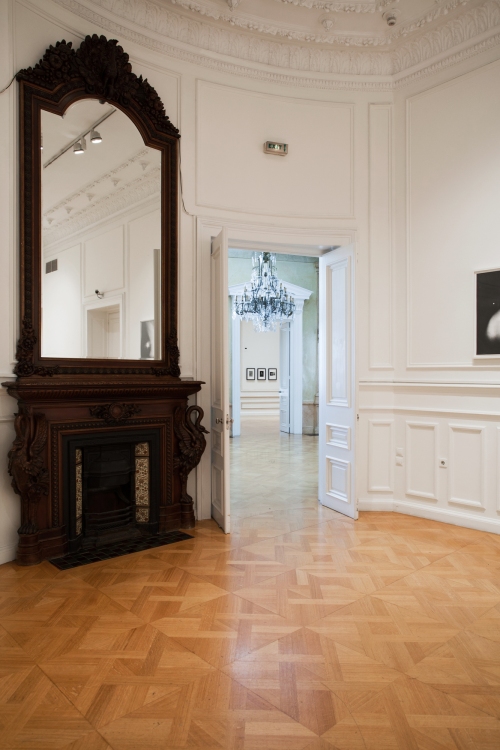 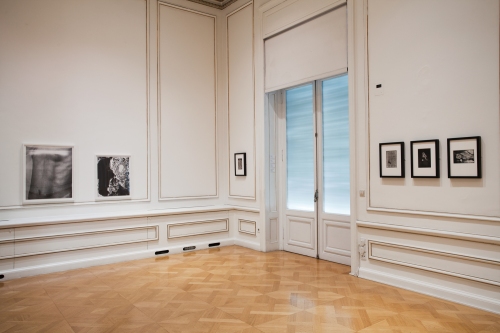 Quinlan and Wols are separated by time, historical circumstances and distinct photographic processes. And yet, their works embody the ambiguity of time, and yet both appear to delegate a part of their process to matter itself, as they travel across several genres: ‘por- traits’, ‘abstractions’, ‘fashion photographs’ and ‘still lives’. (curator’s notes)

[…] why is there a shadow in a kitchen, there is a shadow in a kitchen because every little thing is bigger” writes Gertrude Stein under the entry “Roastbeef” in the section Food of her 1914 volume “Tender Buttons” in which she looks at everyday, familiar, unexceptional ob- jets. (curator’s notes) 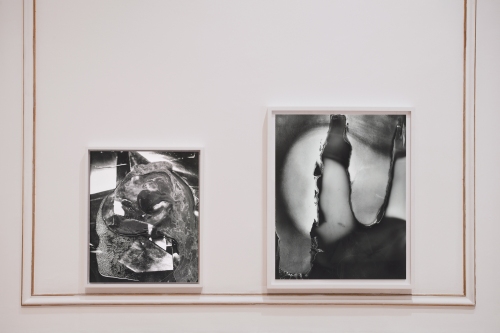 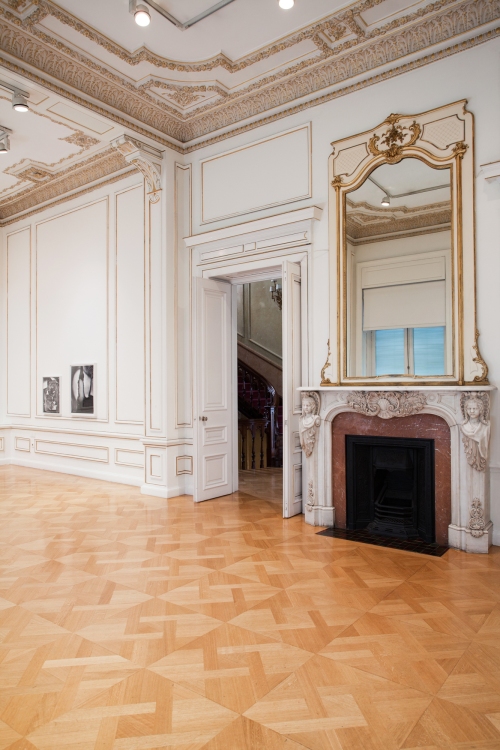 Wols, cited by art historians as one of the three pioneering art informel artists, together with Jean Fautrier and Jean Dubuffet, became known post-humously for his watercolours, drawings, writings and his heavily worked paintings with scratched layers of oil of the mid 1940s. His photographic work of the 1930’s had been largely ignored until photography historian Volker Kahmen and photographer Georg Heusch produced modern prints in 1976 from negatives made available by Wols’s sister, Dr. Elfriede Schulze-Battmann. Wols made numerous portraits, close-ups of pavements and dilapidated walls, rocks and beaches and was commissioned to photograph the ‘Pavillion de l’ Élégance’ in the 1937 Paris World Fair. Often working with borrowed cameras and more often than not unable to procure materials to print his negatives, he used his kitchen as makeshift studio and darkroom. It is in the kitchen that Wols produced some of his most outstanding images: “He went shopping and cooked Spanish or Chinese…..but first everything was photographed [raw]-the rabbit, the onions”, writes his wife Gréty, in a 1966 letter. Defamiliarizing the ordinary through the devolution of objects, Wols still lifes echo Georges Bataille’s writings on the ‘informe’ and ‘base materialism’. They are symptomatic of a feeling of insecurity permeating Paris in the 1930s, an atmosphere mirrored, one can claim, in today’s uncertain developments and imminent changes in Europe. (curator’s notes and exhibition press release). 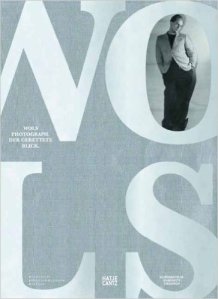 Born in Berlin in 1913, Wols left Germany in 1932 to live in France except for a two-year residence in Spain. After the outbreak of the Second World War, he was interned for over a year in various camps. After his death in 1951, Wols was represented in the rst three Documenta exhibitions (1955, 1959, 1964) and at the Venice Biennale in 1958. Major exhibitions of his photographic oeuvre include: Wols, der gerettete Blick, curated by Michael Hering, Kupferstich Kabinett, Staatliche Kunstsammlungen, Dresden (2013) and Martin Gropius Bau, Berlin (2014); Wols Photographs, curated by Christina Mehring, Busch-Reisinger Museum, Harvard University Art Museum, Cambridge, MA (1999) and Wols, Photographe, curated by Laszlo Glozer, Centre Georges Pompidou, Paris (1980). 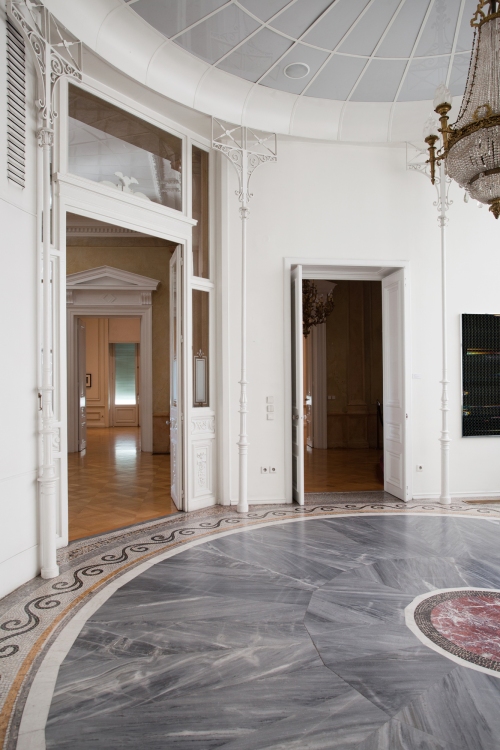 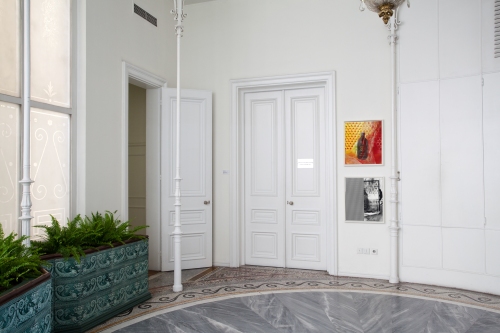 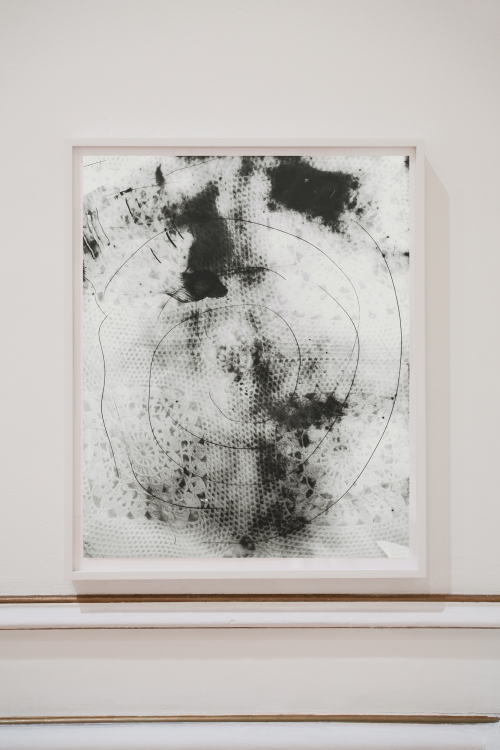 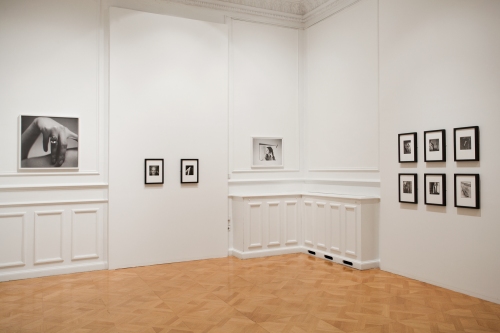 Born in Boston in 1972, Eileen Quinlan lives and works in New York. She has been explor- ing the layers that constitute the photographic apparatus, the materiality of both image and lm, often turning the transformative processes that take place, into her very subject. She has produced ‘still lifes’, ‘abstractions’ and ‘portraits’ oscillating between colour and black and white in order to ‘posit neither chromatic register as truer than the other’, as she notes. She sometimes shoots with outdated polaroid lm, or adds tequila in the water in which the lm may be bathed for weeks. Quinlan’s manipulations of the surface of her negatives include abrasions with steel wool and ballpoint pens, ngerprints and liquids, her active interventions resulting in textured prints. Matter (the body or the photographic materials) and memory (as after image) are inscribed within a medium which is treated ‘not as uncon- ditional reception of the perceived world, but as a position within a scopic regime mediated and in ected by barriers, screens, curtains’. (curator’notes and exhibition’s press release)

Eileen Quinlan teaches at Bard College’s Milton Avery School of the Arts. Her work has been featured in solo and thematic exhibitions internationally including Image Support, Ber- gen Kunsthall, Bergen (2016); Lens Work, LACMA, Los Angeles, CA (2015); What is a Photograph?, ICP, New York (2014) and Momentum 13: Eileen Quinlan, ICA, Boston, MA (2009). She is represented by Miguel Abreu Gallery, New York and Campoli Presti, London/ Paris. Her work is in the permanent collections of the Hammer Museum, Los Angeles; the Metropolitan Museum of Art, New York; the Whitney Museum of American Art, New York and the Museum of Modern Art, New York among others. Eileen Quinlan is represented by Miguel Abreu Gallery/New York.

Helena Papadopoulos carefully chose the pieces by Wols and Eileen Quinlan and placed them in this environment of Cycladic Museum.  I loved the exhibition! Walking from the Athens streets in the  Stathatos Megaro was  a  poetic wave. Thank you Helena!  Couple of years ago in Berlin I had the chance to see the “Wols Photograph – Der gerettete Blick: Ausstellung des Informel-Künstlers im Martin-Gropius-Bau, Berlin .  Moreover, I believe the “Always starts as an encounter ; Wols/Eileen Quinlan” exhibition  is a truly  gem.

The Museum of Cycladic Art is dedicated to the study and promotion of ancient cultures of the Aegean and Cyprus, with special emphasis on Cycladic Art of the 3rd millennium BC.It was founded in 1986, to house the collection of Nicholas and Dolly Goulandris. Since then it has grown in size to accommodate new acquisitions, obtained either through direct purchases or through donations by important collectors and institutions. Read more here on the history of Cycladic Museum in Athens

The Stathatos Mansion gracefully combines elements of Greek and Roman architecture with the canons of Romantic Classicism, prevailing in nineteenth-century Europe. The building is articulated with two virtually identical fronts, which meet at a monumental porch of Renaissance form. The entrance is emphasized by an arched façade supporting a balcony on the first floor, as well as by two statues crowning the roof; work of the Bavarian architect Ernst Ziller, is one of the most important extant examples of Neoclassical architecture in nineteenth-century Athens. It was built in 1895 as the residence of the family of Othon and Athina Stathatos, to whom it belonged until 1938. It subsequently housed diplomatic representations of various states. In 1982 it was purchased by the Greek State and was restored and refurbished by the architect P. Kalligas, with a view to its use as accommodation for VIP guests of the State.For various reasons this plan was abandoned and in 1991 the building was leased to the MCA, in order to cover its increased needs for exhibition space. In 2001 the Greek State decided to concede its use for another 50 years to the N.P. Goulandris Foundation, to facilitate the operation of the museum.

one of the best -designed spaces in Greece, the Cycladic Art Cafe, concept and designed by the wonderful KOIS Associated Architects. 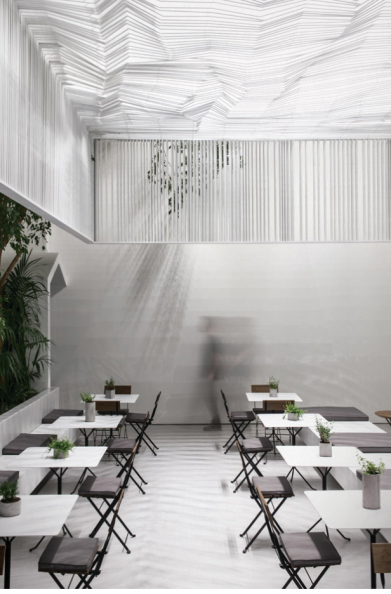 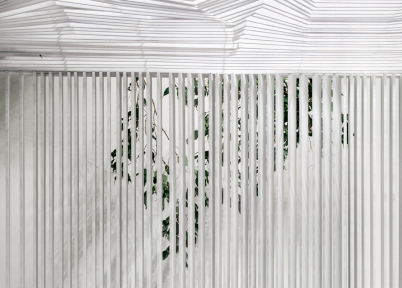 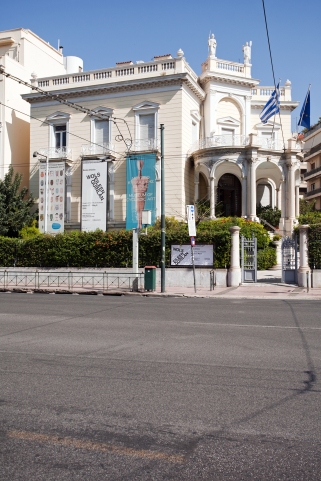 A short visit in Athens few days ago, caught me by surprise of the amazing installation by BLESS at Radio Athenes, where its  dynamic founder Helena Papadopoulos full force completed an amazing installation on the ground floor of the space and continue ‘aggressively’ but yet so beautifully on first floor at her  living space; indeed, an installation with no limits!

The Paris and Berlin based duo BLESS (Désirée Heiss and Ines Kaag) refuse to capitalize on any one milieu, and instead explore the differences between, and the mixing of, the systems of art, fashion, and design. They glide over the conventions of production, distribution and display to create things (to wear, to use, to look at, to smile at) for now and forever. Their collections are titled to reflect a current mood that may ostensibly last for many seasons to come, questioning consumerist behavioral patterns and proposing instead a ‘Present Perfect Continuous’. 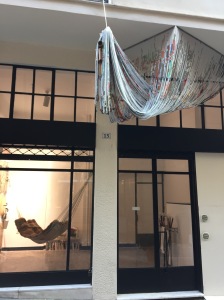 They came  to Athens to inhabit the Radio Athènes headquarters at 15 Petraki Street and the  private apartment on the first floor of the same building.  They transformed these interior spaces into a BLESSHome and  presented their ideal and artistic values to the greek public for the first time. 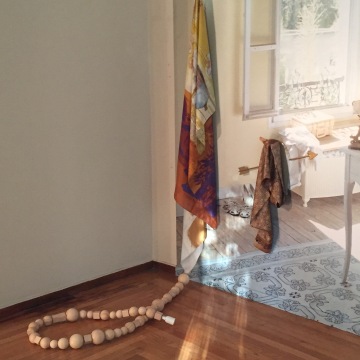 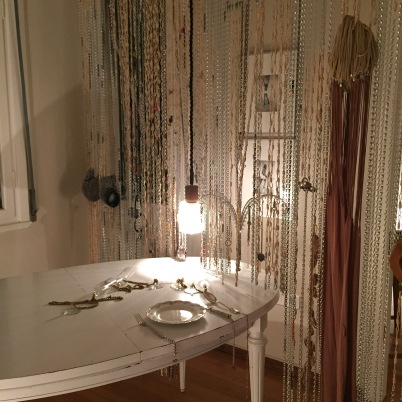 What they do is not so easily summed up. “Many of our clothes are not spectacular catwalk items, but aim to be all time favorites for everyday life,” says BLESS. The collections they create (which is classified by a number rather than a season) feature reinvented garments like the N°10 pleatskirtscarf, a combination of a pleated skirt and scarf. Their projects remain somewhat simple, inspired by the ins and outs of daily life. (somethingabloutMagazine) 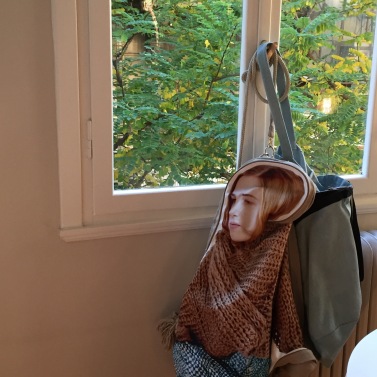 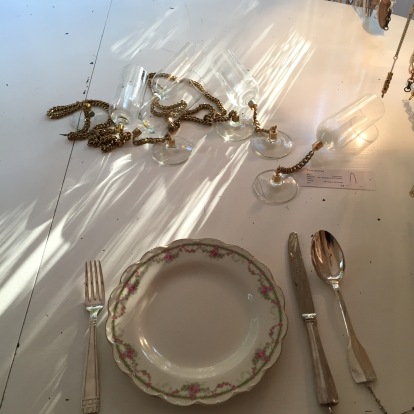 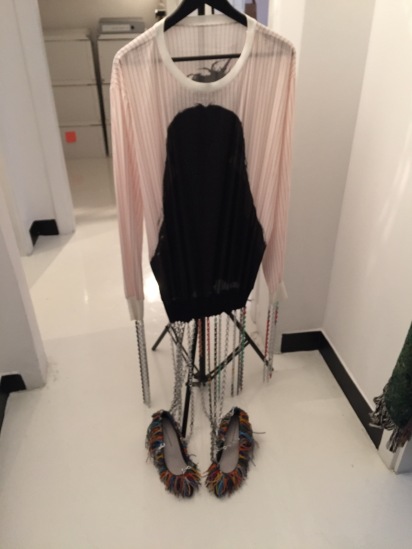 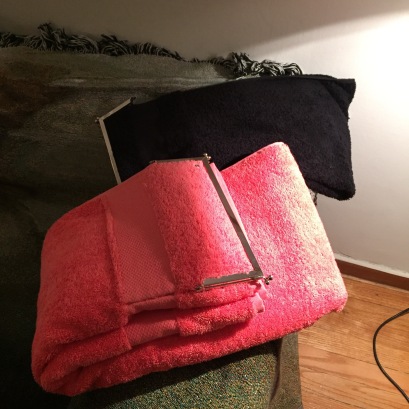 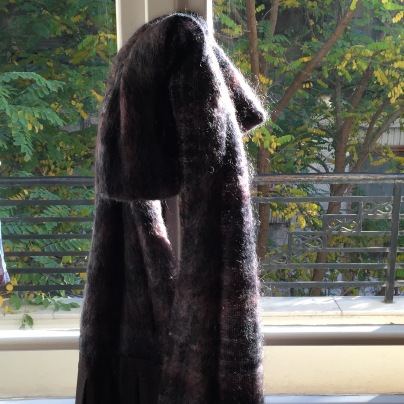 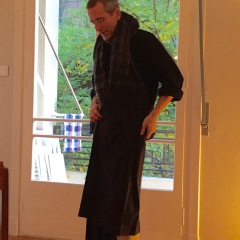 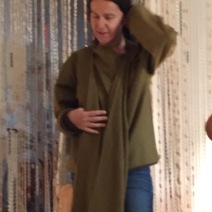 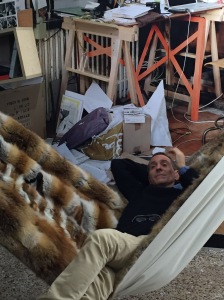 Is BLESS more successful in Berlin or Paris? Where do you more commonly see your garments worn?

Neither nor. BLESS supporters are spread all over the world. In Berlin or Paris, (there) is a concentration of friends and family. The ambitious aim in the beginning was that we wanted to feel like ‘Europeans’ are still relevant; we still don’t care if we get labeled in articles as French or German designers. With time it became more important to concentrate the energy we need for production more in a local context, but the outcome of our work is really without destination. With our perspective as a niche-designer, we appreciate that modern media spreads the information round the globe and connects us with like-minded people from far destinations.(Interview at somethingablout Magazine) 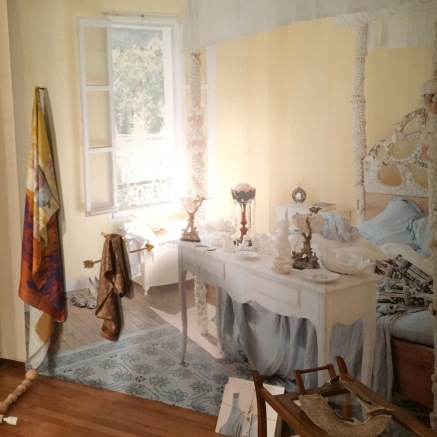 Radio Athènes institute for the advancement of contemporary visual culture is a non profit organization  in Athens. Radio Athènes was conceived and founded by Helena Papadopoulos in December 2014 with founding member Andreas Melas. The centre of operations that doubles as a bookstore is on 15 Petraki Street in Athens, Greece, zip code 10563, near Mitropoleos Square. The nearest metro stops are Syntagma and Monastiraki.