During my short visit  in Athens amidst of the severe crisis of my lovely country with closed banks, people in agony and anxiety on the political and economical situation, it was  indeed a small breath  to visit the Acropolis museum for  the  exhibition ‘Samothrace. The mysteries of the Great Gods’ , organized in cooperation with the Ephorates of Rodopi and Evros and the expert on Samothracian antiquities, Mr. Dimitrios Matsas.

The relationship between the ancient Greeks and their gods was well known and existed publicly in daily life. However, from very early times, mystery cults began to emerge that were accessible only to those who had been accepted into the rites following certain trials. The most famous ‘Mysteries’ in antiquity were those of Eleusis and Samothrace. The strict prohibition against insiders ever divulging the contents of the sacraments has not allowed much information to be gleaned about the ancient mysteries.

Archaeological excavations in the Sanctuary at Samothrace, however, have brought to light buildings and paraphernalia belonging to the cult that allow us to form an impression of events. Insiders believed that by invoking the Great Gods they would be saved from any serious dangers at sea and, as members of the Mysteries, they would become more just and pious people. 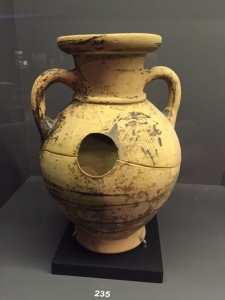 Black- figure amphora with a horse’s head, used as urn. The hole on the vessel is intentionally made, around 560 BC 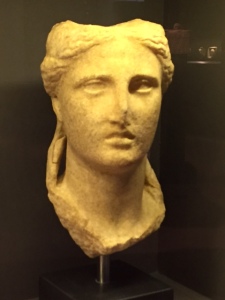 The rituals were held at night, the Sanctuary illuminated with torches, during which initiates had to participate in a purification ceremony, to confess their greatest sins, to attend the sacred narrative speech that included mythological stories, to wear the wide, purple sash around their waists and to witness the unveiling of sacred symbols. 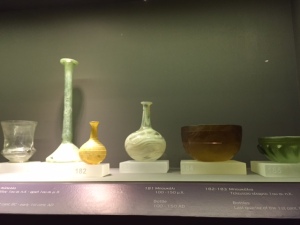 …the assortments of finds has been selected from the site of Mikro Vouni, located a few kilometers southwest of the sanctuary, where excavations have revealed a settlement with an organized social structure of the 2nd millennium BC. Of particular importance are the Minoan stamp seals and seal impressions with representations of a double ax and fish, which have counterparts at Knossos. Perhaps the ancient tradition that calls for the Mysteries to have originated in Crete and from there to have spread to other places has some historical basis.  (section from  press release)

The Nike (Victory) of Samothrace (2nd century BC) is at Louvre, Paris ,(an early classical greek sculpture, an original of Parian marble and about six feet eight inches high, was set up on the prow of a ship carved in an inferior stone and projecting obliquely into an artificial pool among carefully disposed rocks).

photos@VK by permission of the acropolis museum

Proudly  here  I share with you amazing photos of the real visit at Samothrace by Maria Alipranti  and Christos Drazos (excellent photographer) at the wonderful Aegean Pan.com