New York : “Anri Sala : Answer Me” at The New Museum

I love and admire Anri Sala’s work  for years and being fortunate to be in New York for few days to see this amazing, powerful and poetic exhibition “Anri Sala: Answer Me”at the New Museum. This exhibition is brilliantly installed and is as much for music as for art people.  The exhibition features extensive multichannel audio and video installations that unfold across the Second, Third, and Fourth Floor galleries, composing a symphonic experience specific tailored for the New Museum. Needless to say that I visited this exhibition for 3 consecutive days; I was overwhelmed with music, elegance and melancholy but yet, Anri Sala knows so well not to impose or invade your own space.

In his early video works from the late 1990s, Sala used documentary strategies to examine life after communism in his native Albania, observing the role of language and memory in narrating social and political histories. Since the early 2000s, his video works have probed the psychological effects of acoustic experiences, embracing both music and sound as languages capable of conjuring up images, rousing nostalgia, and communicating emotions. In subtle visual narratives, Sala often depicts what appear to be fragments of everyday life, and his intimate observations experiment with fiction to double as enigmatic portraits of society. (The Museum press)

In recent works, Sala has interpreted musical compositions in multichannel video and sound installations that emphasize the perception of sound in relation to architectural spaces. This exhibition features a new spatialization of Sala’s The Present Moment (in B-flat) (2014) and The Present Moment (in D) (2014), in which he rearranges Arnold Schoenberg’s “Verklärte Nacht” [Transfigured Night] (1899) to create the sense that individual notes, abstracted from the composition, travel freely throughout the gallery before accumulating and playing in repetition as if trapped in a spatial impasse.

Anri Sala in Conversation with Massimiliano Gioni (Feb 5, 2016) (livestream) at the New Museum

Anri Sala,  as an art student, he shocked the art world with his  work Intervista (Finding the Words) (1998)a video essay on the recent history of Albania, based on a biographical story. Its opening sequence recounts how Sala discovered a reel of television footage in an old cardboard box. The footage turned out to be a document from the time when his mother, as a young woman, was engaged in the youth movement of the Socialist Party and supporter of former  Albanian dictator Enver Hoxha. Mother Country, the video work of Anri Sala, Jan Verwoert at Frieze, May 2002) 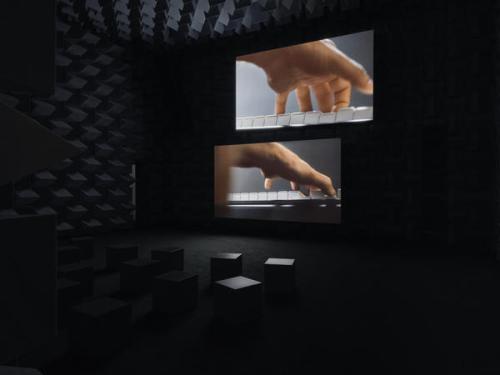 The exhibition  includes the US premiere of Sala’s striking installation “Ravel Ravel Unravel” (2013), first exhibited at the 55th Venice Biennale, where Sala represented France. In Ravel Ravel (2013), two interpretations of Maurice Ravel’s “Piano Concerto for the Left Hand in D-major” (1929–30) are projected simultaneously in a semi-anechoic chamber, a space designed to absorb sound.   (New Museum press).

It features two screens, each with a close up of a hand playing Maurice Ravel’s shimmering masterpiece Piano Concerto for the Left Hand in D-major. “..It is an utterly mesmerizing sonic experience. At the same time, vivid images of the streets of Tirana, Berlin, or Mexico City have been replaced with the sterile anechoic chamber as a background. The animating dance between cultural glory and worldly grit from the earlier works has been channeled into the tension between a piece of great music and its dissonant interpretation.” (Ben Davis, Artnet, Feb 3, 2016)

“The music is Maurice Ravel’s Piano Concerto for the Left Hand in D (1929-30), which was commissioned by Paul Wittgenstein, a pianist (and the philosopher’s brother) who lost his right hand in World War I. The hands on the screens belong to the pianists Louis Lortie and Jean-Efflam Bavouzet, who each performed the concerto with an orchestra, using scores with tempos altered by Mr. Sala slowing or accelerating different parts. Their hands play tag up and down the keys, moving in and out of sync, finishing each other’s passages. The music is at once luxuriant and turbulent; if you know the back story, it can be traumatic. It swirls around, filling and then abandoning the crenelated space, whose protrusions add their own suggestion of violence.”(Roberta Smith, ‘Anri Sala: Answer Me’ Offers Symphonic Experience From Floor to Floor at NY Times, feb 4th, 2016)

Anri Sala feels that language can be used to veil the truth. Thus he is preoccupied with music and rhythm as a form of communication among people: “It produces a choreography instead of producing a verbal discourse.”  The Breathing line , a score by Anri Sala and Ari Benjamin Meyers   (Anri Sala, Music Before Language, interview /vimeo of his work for  the Louisiana Museum of Modern Art in Denmark, 2012 for Answer Me, ) 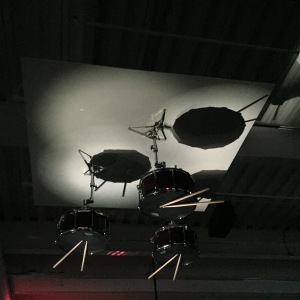 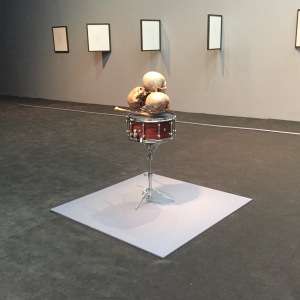 The second floor features The Present Moment (in B-flat) (2014) and the Present Moment (in D)(2014). Installed together for the first time, both work reinterpret Arnold Schoenberg’s Late-Romantic composition “Verklärte Nacht”(Transfigured Night) (1899) to  create the sense that individual notes, released from the original composition, travel across the  gallery before accumulating and playing in repetition as if trapped in a spatial impasse. …The Present Moment (in D) debuted in 2014 at the central hall of Munich’s Haus der Kunst.  For his installation in Haus der Kunst’s central Middle Hall, Anri Sala  devotes his attention to the genre of chamber music, an intimate format that – for the artist – stands in dynamic contrast to the public nature of the work presented in the expansive spaces of Haus der Kunst.

“Anri Sala: Answer Me” at The New Museum/New York  is made possible by the lead support of Lonti Ebers and Bruce Flatt and Maja Hoffmann / LUMA Foundation. Major support is provided by Maria de Jesus Rendeiro and João Oliveira Render. (info provided by The New Museum)