“Recognizing the need is the primary condition for design.” Charles Eames

During a beautiful warm fall afternoon in New York City, I visited  Andrew Ferentinos‘ studio.  The sun was gloriously bright and a beautiful object was calling my  attention on his desk.  Indeed, was an object  that was created on the architect’s desk. Seeing in very simpler essence the experience of everyday life, the need to reach for simple and  important moments that transcend a normal day experience. And there it was standing alone, beautiful and quiet on the desk, “Untitled, Box No,1” 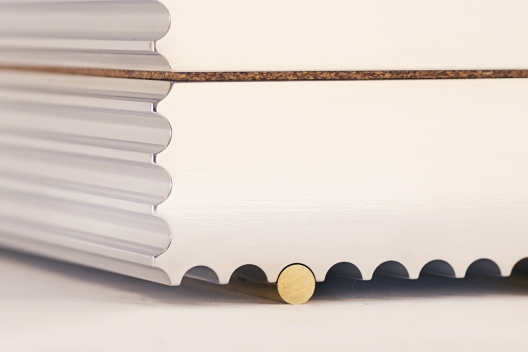 The box is constructed from two solid blocks of aluminum measuring 18″ x 4.75″x 3.5″. Voids within the interior provide storage for business cards or small items. The cork lining provides soft contact when closing. Two brass rods are pinned to the underside and raise the box slightly off the table.

“I am interested in part-to-whole relationships and the repetition of units in series. The concept of the box is to function as a brick. A brick can stand alone or be one of many bricks in a larger assembly. The form of the box is a result of its potential to construct something larger than itself.  This is achieved by the coupling of flutes and rods that fit together, establishing not only a firm joint and locking mechanism but also a sliding mechanism.  Boxes stacked in series function as the stacked sliding drawers of a cabinet.  Like a brick, there is no prescribed way of joining them together. It is up to the builder to make an arrangement.” (Andrew Ferentinos)

Andrew Ferentinos, 11″ x 17″ graphite on paper. sketches for the ‘untitled box no.1’

Villa Savoye, a modernist villa on the outskirts of Paris, designed by Corbusier & Pierre Jeanneret (1928-1931)

Corbusier cited the 1912 book of the Austrian architect Adolf Loos “Ornament and crime”, and quoted Loos’s dictum, “The more a people are cultivated, the more decor disappears.”….He declared that in the future the decorative arts industry would produce only “objects which are perfectly useful, convenient, and have a true luxury which pleases our spirit by their elegance and the purity of their execution and the efficiency of their services. 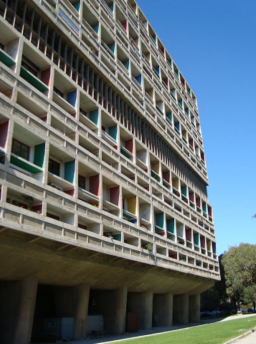 The modular design of the apartments inserted into the building the Unité d’ Habitation, in Marseille (1947–1952)

Andrew Ferentinos has created another luxurious desirable object, which serves as a book stand or paper holder, the  ‘Barcelona Column’

Barcelona Column is an exact replica of Mies van der Rohe’s legendary Barcelona Pavilion column, yet made of polished yellow brass and slightly scaled down to become an object rather than a building component.

The  Barcelona Pavilion, part of the 1929 International Exposition in Barcelona, Spain,  designed by Mies van der Rohe, was the display of architecture’s modern movement to the world.  Originally named the German Pavilion, the pavilion was the face of Germany after WWI, emulating the nation’s progressively modern culture that was still rooted in its classical history. Its elegant and sleek design combined with rich natural material presented by Mies’ Barcelona Pavilion as a bridge into his future career, as well as architectural modernism.

“..In 1930, the original Barcelona Pavilion was dismantled after the International Exposition was over;  in 1983 a group of Catalan architects began working on rebuilding the pavilion from photographs and what little salvaged drawings that remained.  The pavilion is furnished with only a few pieces of furniture and a sculpture by Georg Kolbe on the rear patio. On the occasion of Mies’ s 100th birthday, the pavilion was rebuilt in 1986 according to his original design.

….the Barcelona Pavilion resides on a narrow site in a quiet tucked away corner secluded from the bustling city streets of Barcelona.  Raised on a plinth of travertine, the Barcelona Pavilion separates itself from its context create atmospheric and experiential effects that seem to occur in a vacuum that dissolves all consciousness of the surrounding city.”

‘…..The interior of the pavilion consists of offset wall places that work with the low roof plane to encourage movement, as well as activate Mies’ architectural promenade where framed views would induce movement through the narrow passage that would open into a larger volume….’

Here Mies combined glass, steel, and stone into a reduced abstract composition with clear horizontal and vertical lines. The building’ load-bearing and space-forming elements ae strictly separated and allow for a free-plan interior. Eight chrome-plated steel supports (cruciform in cross section)carry the roof slab, but partitions have been inserted without any structural function. A large travertine plinth raises the pavilion above its surroundings. (Bauhaus, publ. by Prestel,2001,Hans Hengels, text Ulf Meyer, pp.72)

Based on the above detail text on the Barcelona Pavilion, I found proper to relate the fabulous ‘Barcelona Column’ by Andrew Ferentinos.

Andrew Ferentinos studied architecture and art at The Cooper Union in New York City and at Massachusetts Institute of Technology. Andrew Ferentinos received a BArch from Cooper Union and an advanced Masters degree from MIT.  Ferentinos opened his architecture office Ferentinos Architecture in 2012 after working in New York City for such prestigious architects as Skidmore, Owings & Merrill (SOM), Raimund Abraham, and Francois de Menil.  Currently, Andrew is working on the re-constructing ambitious revival (private client) of two houses by Peter Eisenman, on West Cornwall, Connecticut, and Hardwick, Vermont.

The longer I live, the more beautiful life becomes. If you foolishly ignore beauty, you will soon find yourself without it. Your life will be impoverished. But if you invest in beauty, it will remain with you all the days of your life.

Andrew Ferentinos has been one of my contributor writers with a beautiful piece in earlier times for my blog, on Eero Saarinen’s MIT Chapel

…………………Thank you Andrew Ferentinos for your friendship and your story  on Eero Saarinen and your continuous educating me on fine architecture; and  photos and sketches by permission to be published in the VK Blog.(New York, May 2018 )