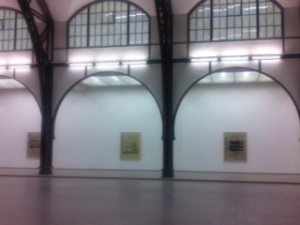 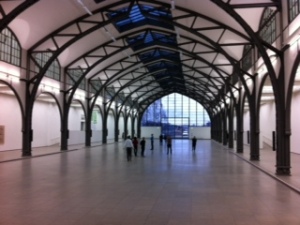 For the historic hall of the Hamburger Bahnhof, Susan Philipsz has designed a sound installation that relates both to the building’s former function as a railway station and to the architectonic structure of the hall with its 12archways. The artist connects the former railway station  – a place of departure and arrival, of parting and return – with the eventful life of the composer Hanns Eisler (1898-1962), who lived in Berlin in the 1020s and 1950s.

The artist has created three pieces, based on three different musical compositions for film by Eisler, that play one after the other, each tone of the compositions wa recorded separately in the studio.  In the installation, the tones are distributed among the 24 loudspeakers installed along the entire length of the historic hall. Each loudspeaker is assigned a tone on he chromatic scale, so that each of the instrumental voices becomes spatialized and wanders  through the hall.

In their works ,Yvon Chabrowski, David Claerbout, and Albrecht Pischel ask about the interstitial world between still and moving pictures that is newly arising through digitalization and changed cultural practices. Their refreshing indeterminacy opens up a still little-known aesthetic terrain that can be described either as a hybrid between or as a synthesis of photography and film/video. (gallery press release)

Yvon Chabrowski transforms pictures from the mass media into the reflective space of a new, slowed down temporality. In Dramatische Funde im Schutthaufen (Dramatic finds in the rubble heap), she turns a press photo of a police operation in the ruins of the home that the neo-Nazi terror group NSU burned down in the city of Zwickau into a performance with actors who, caught in a video loop, are caught forever in their search for forensic evidence.

David Claerbout is the “classic” of this new interstitial world and has been working since the 1990s primarily at the interfaces of photo/film/video and the digital image. With Untitled (Single Channel View) from 1998-2000, we are consciously showing an already “historical work” by Claerbout in dialog with the two younger artists. …..

Albrecht Pischel presents his works in the analog medium of film, but his content relates to painting as well as to photography and digital techniques. The 8-millimeter film “Now is forever New” was shot, unnoticed, with a hand camera in front of Barnett Newman’s original painting “Vir heroicus sublimis” in the New York Museum of Modern Art……