April 4, 2014  ; going tonight with my beautiful daughter; what a pleasure to go to watch amazing dance performances 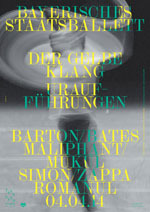 The Yellow Sound is an exemplary work of the most important concepts of the abstract visual arts at the beginning of the 20th century. The result was the approximation, mixing and enrichment of different art forms, as inherent in the work of the Ballets Russes amongst others. The Yellow Sound was created by Russian born but Munich resident painter Wassily Kandinsky, who is probably most well-known for being a part of The Blue Rider group. At the base of the 1906 work is a synesthetic concept, uniting color, sound and movement to complement one another. Five yellow giants are the original protagonists of the piece, amongst a big yellow flower, a child dressed in white and a large man. Michael Simon uses these elements to develop a choreographic theater of images with the dancers, set to musical compositions by Frank Zappa.

Canadian Aszure Barton studied in Edmonton, Alberta, at the Royal Winnipeg Ballet and the John Cranko School in Stuttgart. She started choreographing early on and soon received a commission by the Baryshnikov Arts Center (BAC), New York. Since then, she has created work for the Nederlands Dans Theater and the Martha Graham Dance Company, was artists in residence at BAC New York and founded her own ensemble. This will be her first time working in Munich for the Bavarian State Ballet. Russell Maliphant hails from England but has long made a name for himself in continental Europe. His pieces Broken Fall and AfterLight have received standing ovations from audiences in Munich. This time, he is back by popular demand to create a world premiere on the ensemble.