A misty rainy morning in Munich; what a perfect day  to re-visit  the wonderful exhibition at Architecturmuseum at Pinakothek der Moderne, “Lina Bo Bardi 100. Brazil’s Alternative Path to Modernism” 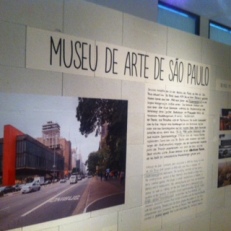 The Italian-Brazilian architect Lina Bo Bardi (1914-1992) defined her own particular artistic path through outstanding designs starting at the mid-twentieth century. In architecture as well as stage sets, graphic art, fashion and furniture design, she implemented impulses of Modernism, but interpreted them quite individually.

Lina Bo Bardi  raised and educated in Italy, she played an important role in the development of modern architecture in Brazil.. She evolved an approach to design that was unique to her and which placed the social significance of construction and its cultural ‘architettura povera’, Linda Bo Bardi can be seen as a forerunner to today’s emergent socially driven ‘architecture engagee’.  One of her most important achievements was her ability to create buildings that were  widely popular among the local public and which defied conventional classification.  (museum press)

The exhibition  beautifully conceived and installed by Dr Andres Lepik, director of Technische Universität/Architecturmuseum  and his team, is  featuring about 100 original drawings. The exhibition opens with a section dedicated to Bo Bardi’s formative years in 1930s Italy, as well as her first activities as editor and designer of such journals as Domus, Lo styles, and A. Cultura della Vita.   An installed cement brick wall runs thru the exhibition space and model makers placed in various positions ; ink jet photos on the wall; a video screening explores her innovative exhibition concepts. ” One of her most important achievements was her ability to create buildings that were widely popular among the local public and which defied conventional  classification. “

Needlees to say how much I enjoyed every single drawing as Linda Bo Bardi managed to bring me in Brazil so elegantly this misty rainy morning; as she says “I don’t produce that many drawings myself. only the essential ones.”

The exhibition is accompanied by the release of a large catalogue that sheds new light on Lina Bo Bardi’s architectural achievements, examined from different angles. Featuring texts by Renato Anelli, Zeuler Lima, Cathrine Veikos, Sabine von Fischer, and Guilherme Wisnik, the catalogue will be available in two editions (English and German), published by Hatje Cantz.

Lina designed Bardi’s bowl chair in 1951. Here is a wonderful written piece on the project of Bardi’s chair by Dr Renato Anelli (architect and professor at the University of Sao Paulo