Jorinde Voigt is known for her lyrical sensibility as well as her calibrated approach to creating artwork. She is a classically trained musician from a family of scientists….

At nine years old Jorinde Voigt  began to play the cello, learnt to read music and matured into a gifted young performer. In 1996 she went to Göttingen’s Georg-August-Universität to study literature and philosophy. To help her understand the subjects she drew diagrams for herself, transforming words into idea maps. (interviewed by Rory McLean, february 2010) 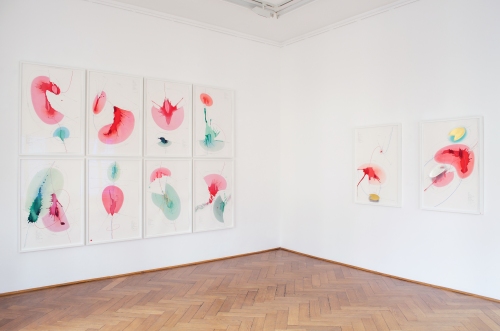 In her new exhibitions at both Klüser galleries, Jorinde  Voigt (b.1977)  shows three new groups of works; you may see the series “Now, Hauro and Synchronicity”. ….” It is getting very difficult to call Jorinde Voigt’s current works drawings; in more general terms, they should perhaps be seen as pictorial and imaginary worlds. … Voigt’s typical grid of lines, numbers and written words creates the base for emergent, exuberant, scarcely assignable constellations of colours and forms. The method of depiction varies from rough to fine, abstract to representational, painterly to plastic. The wealth of materials here seems to know no bounds: gold leaf, white gold, ink, poster paints, oil chalks, pastels, pencil, and feathers dyed black.” Lisa Sinterman, Nov. 2015)

Voigt is best known for her graceful spiralling arcs and parallel looped lines, stretched and interwoven, bursting across the page as if caught up in a strange temporal chain reaction.

“…..her imagery has specifically conjured graph-like linear systems—based on such exact references as musical scores, sound waves, linguistic structures, and mathematical algorithms—then these new drawings, inspired by Luhmann’s nonlinear writing, evoke a more biological take, as they track the evolution from one literary moment to the next. Voigt collages metallic leaf in varying tones alongside swaths of marigold, coral, and azure to create unusual floating forms with an illustrative impishness; the resulting pictures resemble space-age landscapes occupied by mercurial creatures. Her works are innately didactic: She carefully structures the bulbous shapes, framing each with a draftsman’s delicate, curved lines and handwritten text annotations. Ultimately, her drawings function as cognitive maps, as meaning multiplies from passages of text and grows into webs of association. As Voigt regards Luhmann’s discourse on societal structures enabling love, her drawings delineate her own way of reconciling information through whimsical interpretation, shaping an elegant visual reality from the tangles of language”. (Artforum- June 13th, 2014
Critics’ Pick, By Anne Preintnieks)

I have been admiring Jorinde Voigt  some years back when David Nolan, a wonderful gallerist/New York was explaining to me her amazing drawings  at Basel art fair, as one could read as music compositions.  Since I moved and live in Munich and go often at the opera, I am once again mesmerised  with Jorinde’s great   drawings in  the Bayerische Staatsoper books , created in the most elegant way by  Mirko Borsche,  Germany’s most respected art directors. I love Jorinde Voigt’s work.

…Peculiar, sometimes breathtaking forms, from a gold-and-red double helix to floating clouds and virus-like spiky balls, are ringed by obsessive glosses on what Voigt, following Luhmann, calls the “codification of intimacy.” You won’t make out every detail, but her superb drawings are far more than the sum of their sometimes inscrutable parts. (The New Yorker- June 3rd, 2014, for the exhibition at David Nolan in New York)

14/11/2015 – 21/02/2016  exhibition of Jorinde Voigt at Kunsthalle Krems in Austria curated by Stephanie Damianitsch.  ….. Pop songs or pieces of classical music, temperature profiles, wind directions, arcs of light are systematically analyzed by the artist, as are acoustic impulses, angles of view, or colors of individual plants and the contents of philosophical texts.