Berlin and Suffolk-based artist Jessica Warboys elaborates that ‘painting is a wet medium’ with her ongoing series of Sea Paintings.  Last night preview opening  at kunstverein Munich (k.m) for the ‘Schaufenster’ at  Hofgarten she  created  a new piece “Neap Tide” where she developed a new display apparatus for her Sea Paintings, which alludes to photo-cinematic moving panoramas and the loops of film stock.

The mechanism will be turned incrementally, without advanced notice, generating a new rhythm distinct from the temporality of her initial process. The effect is a wave of painterly information that proceeds over time, a picture that is always imperceptibly changing like the crystal flow of tides. 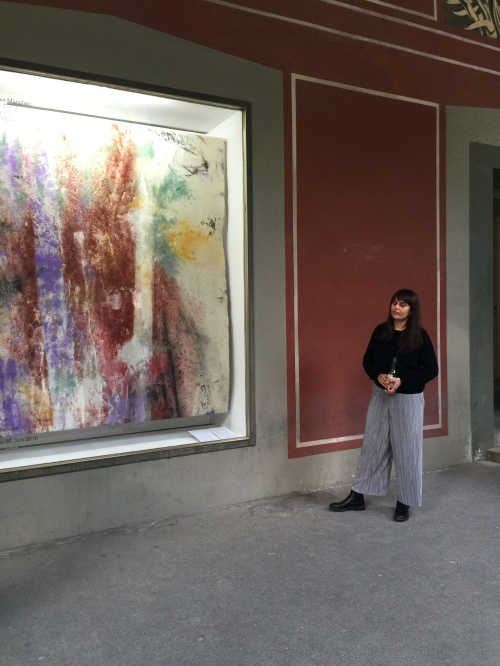 Jessica Warboys  journeyed to the seashore to produce this work during ‘neap tide’a semi-monthly interval where the difference between high and low tide is at its least.  Relinquishing her aesthetic control to the movements of the sea, the Sea Paintings also register the specific place and time of their manufacture. They function a sort of implicit cinema.

‘She lays large sheets of canvas on the beach, applies pigment to their sea soaked surfaces, and then casts the canvases  back out to sea. While seemingly  abstract, the images that result record the intimate and transitory interaction of her own movements with the confluence of the canvas surface, the pigment, and the tendencies and flows of the waves, wind, salt, and sand.'(k.m press) 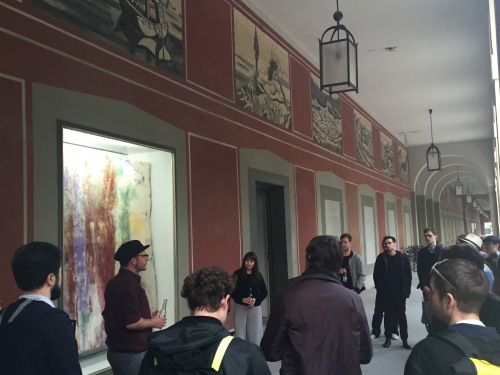 Buketai is the name for the work of sisters Aurime and Igne Aleksandraviciute. As ’flower curators’, they  design a series of arrangements of plants in response to the exhibitions at Kunstverein München.

Following the opening, Warboys and artist and musician Morten Norbye Halvorsen presented  a sound performance and DJ set in the foyer of k.m  that further accentuates the looped logic of Warboys’ exhibition.