….Far from the immensities of sea and land, merely through memory, we can recapture, by means of meditation, the resonances of this contemplation by grandeur. But is this really memory? Isn’t imagination alone able to enlarge indefinitely the images of immensity? In point of fact, daydreaming, from the very first second, is an entirely constituted state. We do not see it start, and yet it always starts the same way, that is, it flees the object nearby and right away  is is far off, elsewhere, in the space of ‘elsewhere’...  (Gaston Bachelard, The Poetics of Space, 1958, pp 183-184)

….when Ottilia died in 1937 (his sister after giving birth to her son Silvio,..”at times I have tried to work on Ottilias’s head but when I perceive resemblance I feel so much pain and regret that I have to stop.” Gradually reducing the scale of his work further and further … this was to become a characteristic of Giacometti’s new sculptural work created ‘de memoire’ (from memory) following his decision to abandon studies ‘d’après model’ (based on a model). (Casimiro Di Crescenzo “Alberto Giacometti: towards a New Figurative Art, 1935-45) ( Luxembourg &Dayan publications,2018)

……“wanting to create from memory what I had seen myself, the sculptures gradually became smaller and smaller, bearing resemblance only when they were small… Often they became so very small that with one touch from my knife they vanished into dust.” (Alberto Giacometti writes  to  Pierre Matisse, his art dealer in New York,1948) 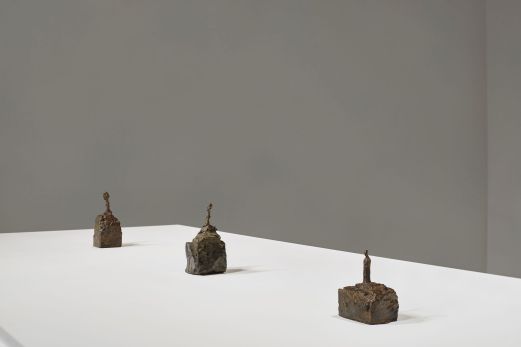 The exhibition “Intimate Immensity: Alberto Giacometti Sculptures, 1935-1945” at Luxembourg & Dayan  is exclusively dedicated to the artist’s cycle of very small human figures created in France and Switzerland during the Second World War….the exhibition is installed in collaboration with the contemporary Swiss sculptor ups Fischer , who shares Giacometti’s passionate commitment to redefining the human form as conduit for and conveyor of psychological experience (gallery text) ..The works are no more than three inches tall and as thin as nails are elegantly placed in large vitrines and dramatise the scale of the tiny sculptures in Manhattan’s second narrowest townhouse, foregrounds Giacometti’s insights concerning scale. 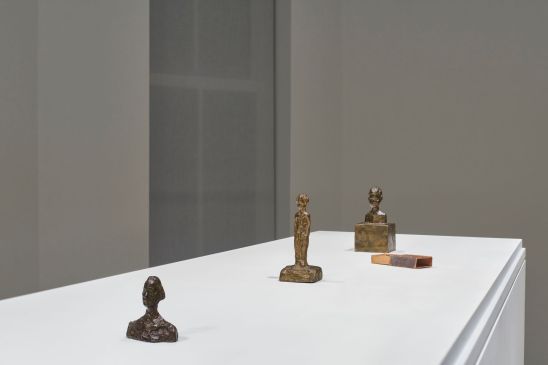 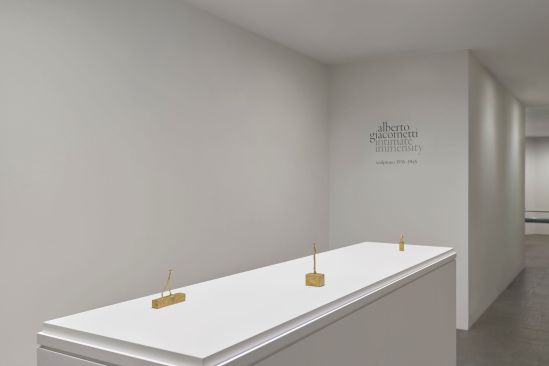 Bachelard wrote in a chapter entitled “House and Universe.” “A house that has been experienced is not an inert box. Inhabited space transcends geometrical space.'” In  lyrical chapters on the “topography of our intimate being”—of nests, drawers, shells, corners, miniatures, forests, and above all the house, with its vertical polarity of cellar and attic—he undertook a systematic study, or “topoanalysis,” of the “space we love.” (Joan Ockman “Poetics of Space” by Gaston Bachelard at Harvard Design Magazine, no.6) 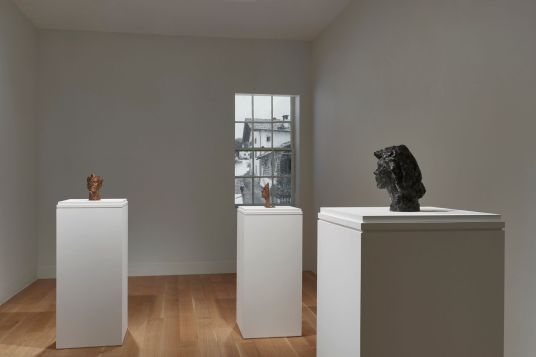 “The sculpture I wanted to make… was meant to capture precisely the vision I had of her in the moment that I saw her for the first time in the street, from a certain distance. I wanted to give her the grandeur that she had at that distance.” He added, “I saw an immense blackness over her, the row of houses; so, in order to give that impression, I had to make an immense pedestal so that the ensemble will match the vision.” (Alberto Giacometti, later in life, explains  to Pierre Dumayet,(1963) how the gradual diminution of his sculptures in this period finally found its true purpose in a portrait of his model and intimate friend Isabel Rawsthorne) 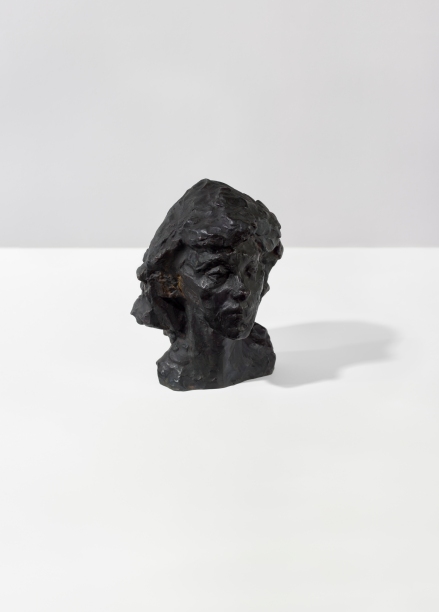 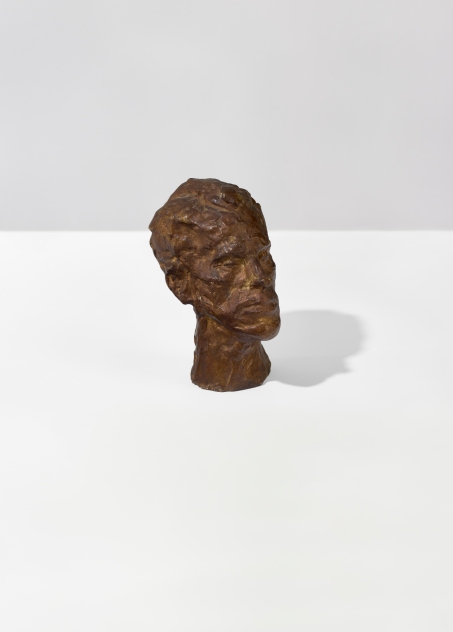 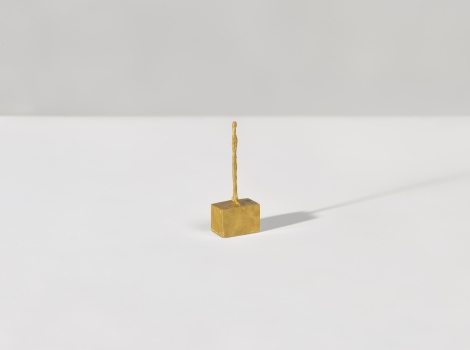 If we could analyse impressions and images of immensity, or what immensity contributes to an image, we should soon enter into a region of the purest sort of phenomenology – a phenomenology without phenomena; or, stated less paradoxically, one that, in order to know the productive flow of images, need not wait to the phenomena of the imagination to take form and become stabilised in completed images. (Gaston Bachelard, The Poetics of Space, 1958, pp 183-184) 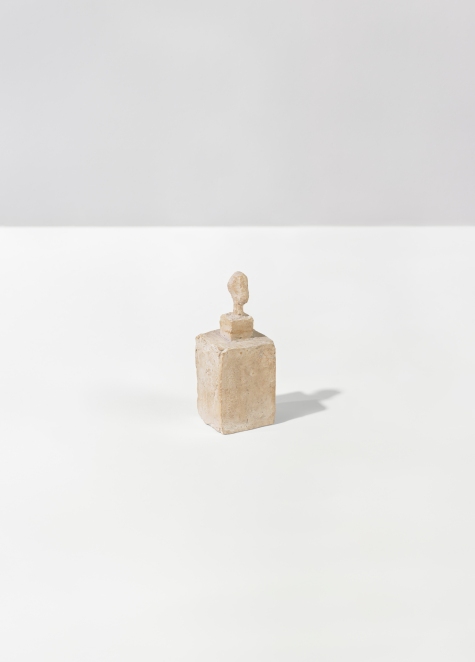 La Poétique de l’Espace (1958) was first published in English in 1964, two years after Bachelard’s death, then in paperback in 1969, and reissued in 1994. An allusive little book, its author was a highly-respected philosopher who late in his career had turned from science to poetry.  Nothing about his intellectual journey had been orthodox, particularly as measured against the rigid norms of French academic life and advancement.  He was from a provincial background in Champagne, a post-office employee, who rose largely through intellectual tenacity to hold a chair in philosophy at the Sorbonne.(Gillian Darley, writer in architecture and landscape, in Aeon)

On the subject of the home as a workplace, art critic Kirsty Bell  in her book “The Artist’s house” (published by Sternberg Press, 2013) suggests that for the artist, the freelancer, and the homemaker as well, “there isn’t a true division of when our work day ends and our evening of relaxation begins.” She explains, “that’s because we’re all constantly available and communicating.  That’s very new and radical!”

and important to mention here Aristotle, a towering figure on ancient Greek Philosophy …

Aristotle rejects the definition of space as the void. Empty space is an impossibility. Hence, too, he disagrees with the view of Plato and the Pythagoreans that the elements are composed of geometrical figures. Space is defined as the limit of the surrounding body towards what is surrounded. Time is defined as the measure of motion in regard to what is earlier and later. It thus depends for its existence upon motion. If there where no change in the universe, there would be no time. Since it is the measuring or counting of motion, it also depends for its existence on a counting mind. If there were no mind to count, there could be no time. As to the infinite divisibility of space and time, and the paradoxes proposed by Zeno,  Aristotle argues that space and time are potentially divisible ad infinitum, but are not actually so divided.

……..Thank you Luxembourg & Dayan for this opportunity to cover this amazing exhibition and permission to the visuals and thank you Stephanie Adamowicz (gallery director) for your lovely walk thru and all information and gift  / publication ; is a marvellous book  (VK note)