On the occasion of the exhibition opening at Haus der kunst of Stan Douglas, at 5 pm  a talk took place between Stan Douglas, Johan Simons, intendant of Münchner Kammerspiele, Okwui Enwezor, and León Krempel

Haus der Kunst presents the photographs that Stan Douglas has produced since 2008, as well as his newest works, revealing him at an exceptional moment in his artistic career in the exhibition “Stan Douglas: Mise en Scène”: In these works, Douglas has closely interwoven music, film, theater, photography, and digital formats, allowing them simultaneously to be associated with various forms of media.

A focal piece in the exhibition is the video-music installation “Luanda – Kinshasa” (2013), a fictional narrative about the absent Miles Davis. Douglas also broke new ground with his theatrical production of “Helen Lawrence” (2014), in which the actors’ performances are filmed in real time and immediately uploaded into a computer-generated environment. “Helen Lawrence” will run as a guest performance at the theater Münchner Kammerspiele simultaneous to the exhibition. 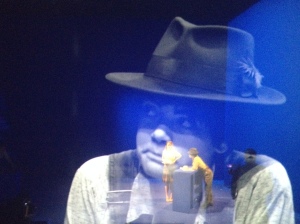 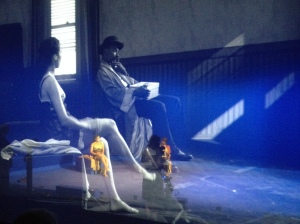 I had the privilege to attend the amazing cinematic production of Stan Douglas “Helen Laurence” and discussion at the Münchner Kammerspiele last night and followed by a lovely dinner.

more on the exhibition http://www.hausderkunst.de/en/agenda/detail/stan-douglas-opening-and-talk/

Today, this morning at Pinakothek Der Moderne, part of a series of films screened  as of Jeff Wall exhibition. at the Ernst von Siemens Auditorium  I saw ” Old Joy”, 2005  written and directed by Kelly Reichardt; with Will Oldham, Daniel London; the film features a fantastic soundtrack by Yo La Tengo.

The most amazing is that films that somehow have gotten out of my attention living in New York, thanks to amazing things  at the Munich museums I can catch up on my film literature..

The story of two old friends, who reunite for a weekend camping trip in Oregon’s Cascade Mountains. OLD JOY is the critically-acclaimed film The New York Times calls, “A MUST SEE!”

As subtle, supple and beautifully fine-tuned a film as any American director has made in the past year. Dennis Lim, The Village Voice

sample of Yo La Tengo soundrack

The Munich Academy opened its doors this to present the “Diplome” graduate students’  work; from the class of Prof. Klaus vom Bruch, I was taken by an amazing work, the documentary  ‘ödland/wateland’ by Anne Kodura,  photography by Friede Clausz   The film is about 80 min. was presented in a small custom made film room in her studio at the Academy. Saturday, February 11:30 will be screened at ARRI KINO München (Türkenstrasse 91)
It is an excellent job by a young and much promising new filmmaker.  Reflections in my mind  of
Truffaut’s film “400 Blows” and the british neo realism films, such as “Life at the Top” with Laurence Harvey.  But here Anne Kodura is working with a difficult subject; children.  Anne  told me she was for some months close to the children to get to know them before the camera came in. The photography by Friede Clausz is par excellence.

synopsis :” It is the summer holidays.

Deep in the woods and among some sheep pastures a bloc of flats stands on a former military base of the Soviet army. Surrounded by ruinous barracks, an overgrown soccer field and a brand new wire mesh fence.  This is where Aya, Momo and Mustafa grow up. They spend the holidays at home at the asylum seeker’s camp. Born and raised in Germany, they do not really understand this “asylum seeking thing”, but rather want to be quite normal. They chase away the boredom by playing football, make a trip to the nearby lake and dabble in copper scrap trading.

A story of childhood, home and the search for identity.”

“ödland/wasteland”  has participated in the following festivals and has received many prices:

more here on the film’s site

a lovely snowy day to visit Pinakothek der Moderne to see many masterpieces but a newly installed single channel video “Mathilde, Mathilde” caught my attention ,  by the artist I met in Berlin and  like very much,  Mathilde ter Heijne (born Strasbourg,France).

Mathilde is the name of the tragic heroine of Truffaut’s film La Femme d’à Côté, 1980, whose love for an older man ends in death. Also the leading female characters in Jean-Claude Briseau’s Noce Blanche, 1990, and Patrice Leconte’s Le Marie de la Coiffeuse, 1991, are named Mathilde and broken by their romantic attachments. Rather than falling victim to a disillusioning reality, the women find their escape in suicide. Mathilde ter Heijne takes these stories of self-sacrifice for an utopian ideal of love. Can fate be linked to a name? She mixes original sound extracts from the three films with video scenes in which she herself assumes the role of the tragic heroine. Using a special effects dummy, Mathilde ter Heijne depicts her death leap from the bridge and the struggle with her “alter ego.” The location for the short drama is Amsterdam where the artist used to live and work.

“The group exhibition ‘La voix humaine’ at Kunstverein München features works by artists that offer contemporary perspectives on themes within Francis Poulenc’s 1958 operatic adaptation of Jean Cocteau’s one-act play of the same name. The exhibition takes this drama as its starting point to identify how heightened forms of affect are mediated in society today; from public exposure of emotionality in need of an audience to a consequential role technology plays in facilitating intimate relationships with its users”

Munich; “Bernd Eichinger – …alles Kino (..Everything is Cinema) at the Kunstfoyer of VKB, Maximilianstrasse 53

a fabulous exhibition at the Kunstfoyer der Versicherungskammer Bayern :A chronological table combined important events from his professional, private and public lives with objects, photographs and film clips.

“Bernd Eichinger (1949–2011) was Germany’s most important film producer in recent decades. Fulfilling diverse functions, he oversaw and accepted responsibility for more than 100 film and television productions. His name is linked to the Munich distribution company “Constantin Film” where he took an active role until 2006. Initially under the name “Neue Constantin,” he led the company to major successes, building one upon the other since the 1980s.

What does a film producer do? He bears financial responsibility for a film project from beginning to end: from the development of its subject through its international marketing. He is the “driving force” behind every film production, and must know all its steps and consider any risks involved. The film producer Bernd Eichinger, who studied at the University of Television and Film Munich (HFF), embodied this role as a creative authority with all his passion; like no other. Eichinger made films for a “wide audience” beginning with his involvement with “Constantin”, although his productions often raised controversy among German critics. Within the international film business Eichinger enjoyed great recognition.”