Marge Monko  “How to Wear Red” curated by Rainer Fuchs 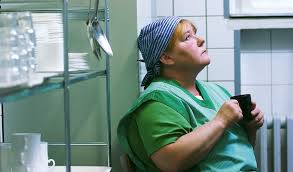 At the center of Marge Monko’s (b.1976 n Tallinn-video and photo works lies an examination of  social developments in a post-socialist context.  Marge Monko is the winner of the 2012 Henkel Art Award. Monko traces the changes in gender -based role models that were inserted into Estonian culture by neoliberalism after the end of the Soviet era. In How to Wear Red she portrays a society undergoing change and refers to the connections between the communist past and present day identify models.  The artist also exhibits a similar critical awareness of communist legacy history in her photo work about the Soviet monument in Vienna’s Schwarzenberplatz.

In some of her works Marge Monko links questions of the reality of gender specific hierarchies with ethnic conflicts. One of the works that I enjoyed was the two part video work , Forum (2010) …

Here, the two subjects overlap and is especially pronounced in the form of underprivileged Russian textile workers; they have been multiply marginalized, not only as women and as part of an ethnic minority but also as symbols of a former occupier..  In this work, the title of the work refers to a television debate which took place in 2009; in it political and trade union representatives discussed a new labor law in the context of the economic crisis. In the final outcome it was the Russian women workers who suffered most. While the original discussion was carried out exclusively by men, Marge Monko has the unemployed Russian women take over their roles. They read the original statements but add their own critical commentaries. In this way those who had no opportunity to speak for themselves at the time can now make their voice heard  – a reference to Bertolt Brecht’s worker’s theater.